We had planned to do a velo tour around the city this morning, but late last night, when I couldn’t sleep I thought it might be a better idea to visit the Buddha Park today.

Instead of taking a tuk tuk (200 000 KIP = Fr 24) we took the local bus (48 000 KIP =Fr 6). And that in itself was already the first adventure. I felt like years ago in Sri Lanka where I was in a bus station looking for a specific bus but unable to read the signs. And today it felt the same. The people on the street can hardly understand any English, so it is always a gamble to find someone who might be able to help. We walked around that station, which in fact wasn’t really a station but just a junction with a few bus stops. Where our bus was supposed to be, another bus was standing. I asked several people and finally we were directed to a stop. We got on the bus and hoped it was the right one. Stéphane checked about half way to the Buddha Park his app and it was showing that we were going in the right direction. Good. And their ticket system is also funny. You step on the bus, and either when you leave or later during the journey someone comes around and collects the money.

Because we had left fairly early we got there fairly early. The trip takes about 1 hour and is not really eventful. But the park is really amazing. Für alle meine Kanton Fribourg Leser… uns erinnerte der Park ganz stark an den Gnomengarten.

The Park was created in 1958 by Luang Pu Bunleua Sulilat, a monk who studied both Buddhism and Hinduism. This explains why his park is full not only of Buddha images but also of Hindu gods as well as demons and animals from both beliefs. If you google “Vientiane Buddha Park” you get an idea, of the Park. All sculptures are made of reinforced concrete.

One of our favorites was the large pumpkin representing the three levels: hell, Earth and heaven. One can enter the pumpkin through its mouth and climb on the inside all the way to the top and has a good view over the Park.

Our way back from the Park took a bit longer, because we had to wait for the bus, that didn’t come as announced every 15-20 minutes. Stéphane will need some time getting used to the un-Swiss way of timetables here.

When we were back we enjoyed another lovely soup in the same place as the day before, before we took a shower and relaxed a bit.

Later on the big project was to go to the Northern Bus station to get our tickets for our next bit of the journey. So Alina and I left the guesthouse hoping to find a bus that would get us to the bus station. By that time the traffic was so heavy that it looked more like rush hour in Zurich or New York. We were getting hot and tired of waiting and suddenly I realized that I wouldn’t have enough money in my purse to pay for those tickets. So we decided to forget about our job and go instead for a nice drink and a piece of cake.

On our way back we passed the place where I had left the laundry in the morning. We now have clean clothes again and I didn’t have to wash them :-). After our return the whole family ventured out to go to the bus station (this time with more money) and the streets looked just as jammed as before, only now it was really dark and hard to read any signs on potentially passing buses. I am saying potentially because there were none. In the end we resigned and sought help from the guy in the AVIS office who had just looked the door but was nice enough to answer my knocking. He took us to a bus ticket office and there we were given some other information than we had before. This is also Lao. Things change and so did our planning. We will stay one more day in Vientiane and leave Wednesday morning for Huay Xai a place up north. The 869 km will take us just under 24h by bus. 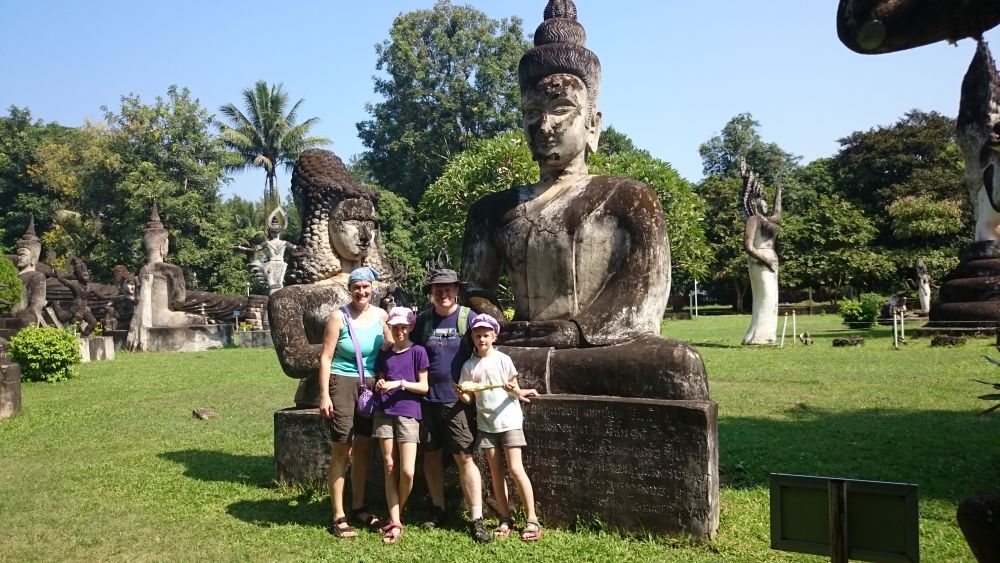