We left the guest house around 8:30 am and walked to the agency that had sold us the bus tickets to Huay Xai. From there we took at 9 am a tuk tuk to the Northern Bus station in Viantaine.

When we arrived there, the tuk tuk driver went inside to check from where the bus was leaving and come back with the news that the bus had a breakdown and wasn’t going anywhere today.

And then there was a long silence in my brain.

I went inside to double check the information. And yes the bus would leave tomorrow but not today. There would be another bus to Huay Xai at 5:30 pm but not a sleeper.  Then we decided to change our plans and to take the bus to Luang Prabang. That one left at 3:30 pm. So we had a lot of time between our arrival at the station and the bus leaving. Lovely.

When the time approached we boarded the bus and then I saw it.

Lucky 13 was our bus terminal. What would that number bring us? Well we were about to find out.

The distance between Vientiane and Luang Prabang is 343 km, so normal driving time would be something like 5 hours, but here they told us that it might take 10-11 hours.

We left around 2 pm and sleep took the better of me. 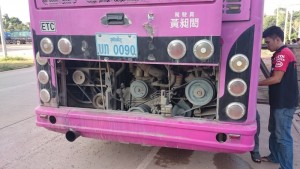 At 4:30 pm I woke up because we had stopped. The bus was parked along the road just before the Hinheup bridge. I left the bus and what I saw was a mobile Mac Gyver station. Our bus driver and the second one were extremely skilled and fixed the bus in no time. Later I found out that the breaks had broken down. By that time we had only done about a 1/3 of the distance.

Then at 7:15 pm next breakdown. Handy, because Lara needed a loo. We continued pretty quickly but not because the bus was fixed but because they needed more help, which they got at the place where we had dinner about 8 km further down the road.

To cut a long story short we arrived safe and sound at 1:30 in the morning in Luang Prabang, took a tuk tuk to the center and found the first guesthouse closed. The second one was open and we woke up the guy who had one more 3 -bedroom left. We just took it, collapsed on the bed and slept.