Today on the way back from the waterfall I had the feeling of having to pinch myself, just to make sure I wasn’t dreaming. I am in Lao. I am travelling. With my family. I am living my dream.

And my dream started very early this morning with being picked up from the Guesthouse to go to the pier for the boats leaving for Pak ou Cave. 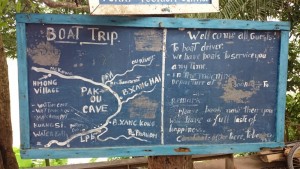 But before we got to the Cave, we stopped at the “Whisky Village”. Apparently here the people make whisky. But we didn’t see any of that. What we saw when we left the boat was the most beautiful silk and cotton textiles. Endless stalls were flanking the streets and there is no way of seeing it all, especially in 15 minutes. 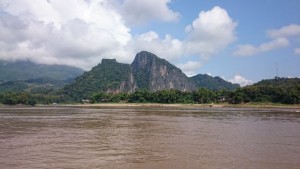 The Mekong is beautiful, big, brown, majestic and not quite as dirty as I had thought. There are a few plastic bottles in the water, but we think they are actually fixed to show the boats were the water is shallow. The shores are used as gardens for the people living there and not all of them are poor, because we also saw amazing houses and terraces along the way. And then the landscape. Indescribable.

After 2 hours and 15 minutes we reached the Pak ou Caves. Here are two famous caves cut into the limestone cliff. Both are crammed with Buddha images of various styles and sizes. (Lonely Planet). When we arrived we first went to the Upper Cave and with our headlamps we were well equipped to see around the darkness.

Then down all those steps and into the second cave. Flogs of people were doing exactly the same thing. So both caves were pretty cramped and it was difficult to feel the special atmosphere this place might have to offer and the limited time we had again (just 45 minutes) didn’t help. I was continuously checking my watch and had even put an alarm on, not to be too late at the boat. 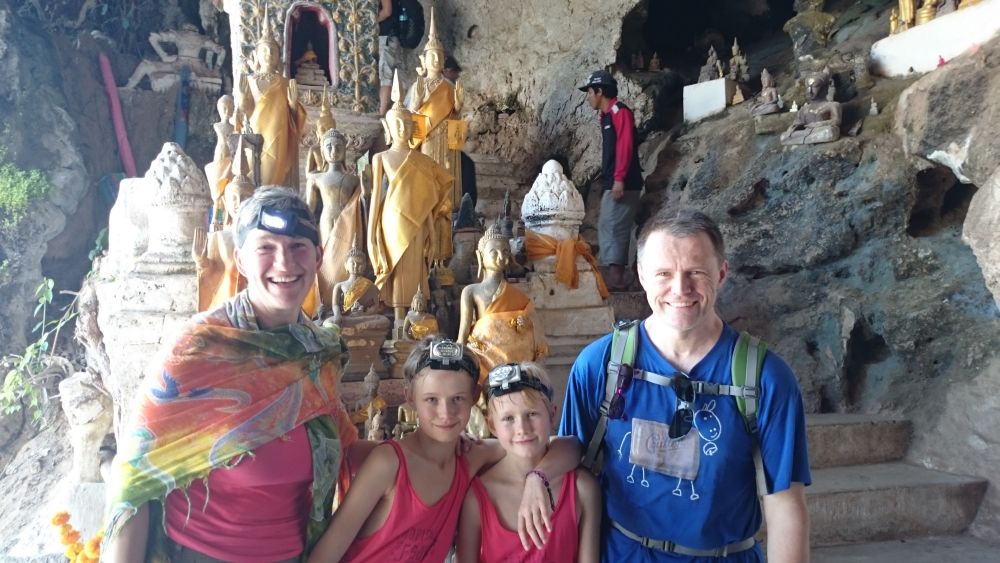 The Lonely Planet was far to optimistic with the time at hand, which meant it all being a bit of a rush, which I personally hate. 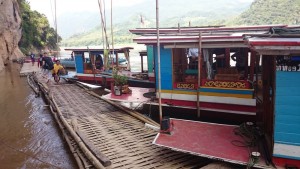 So back to the boat and  we returned to Luang Prabang, where we arrived at 1pm. The return trip is much shorter because it is going downstream. Then we went very quickly back to the guesthouse, changed the content of the backbag, got some sandwiches and just as we were ready the minivan arrived that took us to our second location of the day, the waterfall Tat Kuang Si. 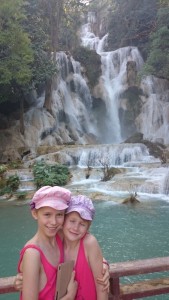 This is an amazing place. Upon entering the park, one of the first attractions is the Tat Kuang Si Bear Rescue Centre. The residents here have been confiscated from poachers and are kept here in preference to releasing them to the same certain fate. (Lonely Planet) And we did see bears. Many. But we didn’t spend too much time watching them, the kids needed some water playing. So first we went all the way up through the forest to the waterfall and then back down again to one of the three azure-blue pools. The ground here is clay and very slippery. So when I wanted to bring some stuff to a bench, I slipped and sat with my bum in the water. But my reflexes worked perfectly. My left hand up in the air – phone and towels saved. The rest of me – wet. 🙂

This is a place where one can spend easily the whole day. There is so much to see. There are a lot of explanations to some of the huge trees, then the bears, there is a natural trail, and one can change from one pool to the next and even walk all the way to the top of the waterfall. We didn’t even have time for that. But the girls had so much fun. Me too 🙂

When we were back in Luang Prabang the night market was just starting and we went for some food. 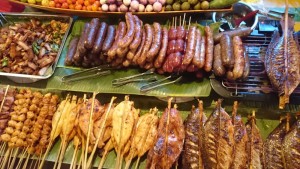 Stéphane and I took fish, Lara a sausage and Alina some pork. The fish was amazing. Lara’s sausage was too spicy for her so I ate it and Alina loved her pork. This night market is one of a kind. There is the food part and then also the textile and craft part. We nearly bought a really really really really nice table runner. It looked amazing, the “price negotiations” were successful and then I found a couple of red marks on it, on the second one there was also something… and something inside said suddenly “no“. The lady had initially told me that she had made them. But strangely enough the stall right next to her had the very same table runner. So I started wondering if there are not MADE IN CHINA. And in fact, if I looked at this evening market, which was really only for tourists, every second stall had the same things. We even found trousers that Alina and Lara had gotten from their grandparents as a souvenir from Italy. I would love to buy some really nice  AUTHENTIC things, made in Lao but not something like this.