The guy that had yesterday given us a lift to Mulberries and definitely overcharged us, came this morning to pick us up for our excursions. We had agreed on a price and I thought it would be the easiest way of travelling. The Plain of Jars are not accessible by bus. So one has to hire a motorcycle 🙂 or a car.

The whole haggling around the price with him, and the strange way of going up with the price instead of down, made it really difficult for me to feel ok. At some point I was close to just giving up. Nevermind all the theory and all the beautiful Harvard win win principles, it all is for nothing if the other one is really not moving.

At 8:30am we left the guesthouse in Phonsavanh and were heading towards Jar Site 2. The first thing arriving there we noticed were the MAG marking stones. They showed with path was safe to take and which wasn’t. After having seen the documentary the previous night, it became all much more real for us. Alina especially reacted strongly and at some point was worried of going to the loo… there might just be some bombies. 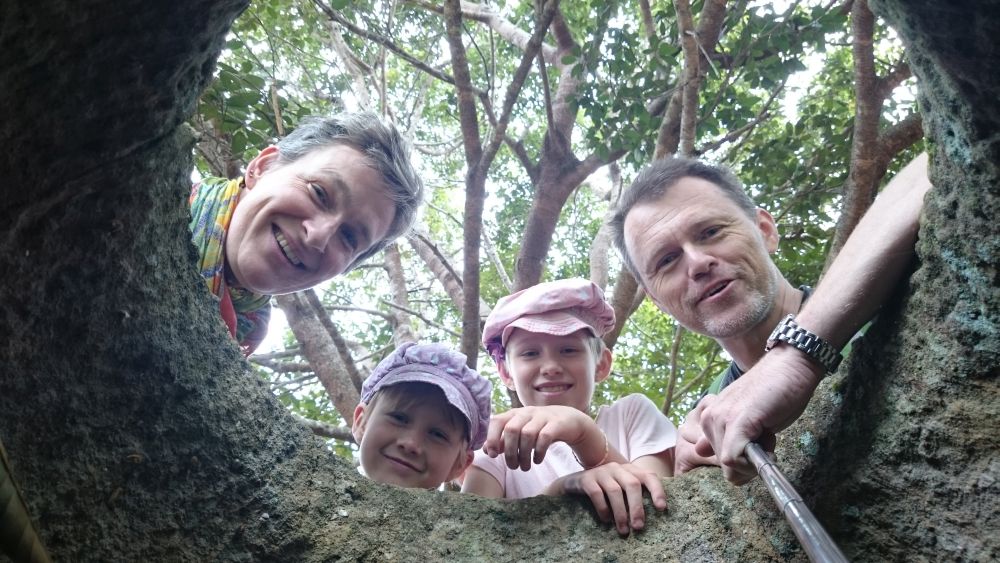 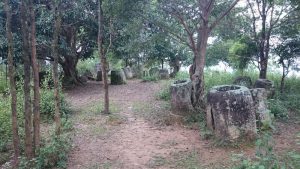 Site 2 is a pair of hillocks divided by a shallow gully that forms the access lane. This rises 700m from the ticket desk in what becomes a muddy slither in wet conditions. To the left in thin woodlands, look for a cracked stone urn through which a tree has managed to grow. To the right another set of jars sits on a grassy knoll with panoramas of layered hills, paddies and cow-fields. It is very atmospheric. (Lonely Planet.)

Nobody really knows where these jars come from, who made them and for what purpose. There are plenty of stories, everything from them being used to make rice wine, over being burial tombs.

On our way to Site 1 we stopped along the road where we had seen some locals harvesting rice. Do you guys know what a rice plant looks like and how they harvest them? Well we didn’t but now we do. 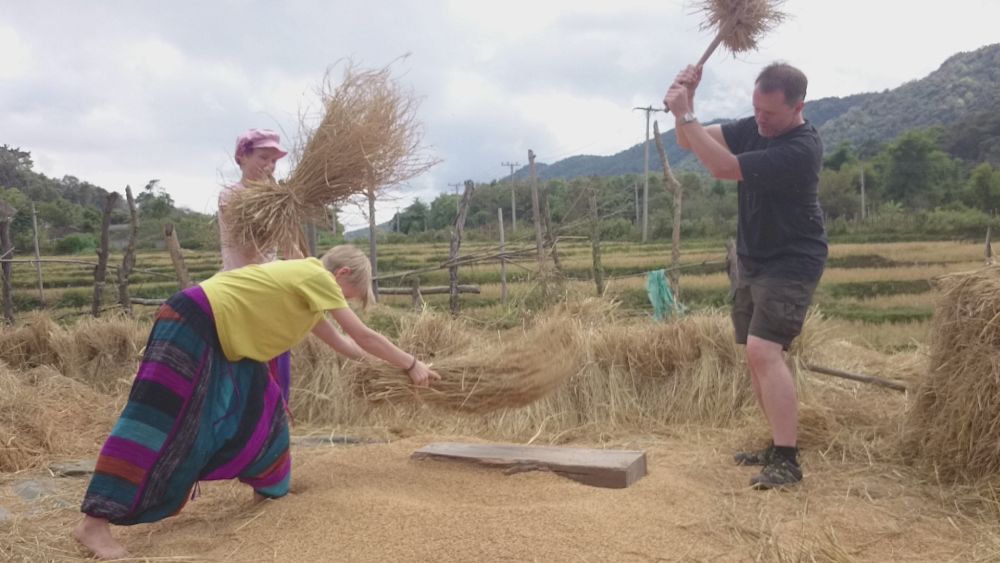 The rice plant looks just like any other crop plant. When cut they hit it hard on a piece of wood and getting that way all the grains out. There are three type of rice here: normal rice, sticky rice, and the rice for rice noodles.

Following the street we then went to Jar Site 1. This is the biggest out of the three main ones. MAG has cleared 60 jar sites so far of the roughly 90 known sites. 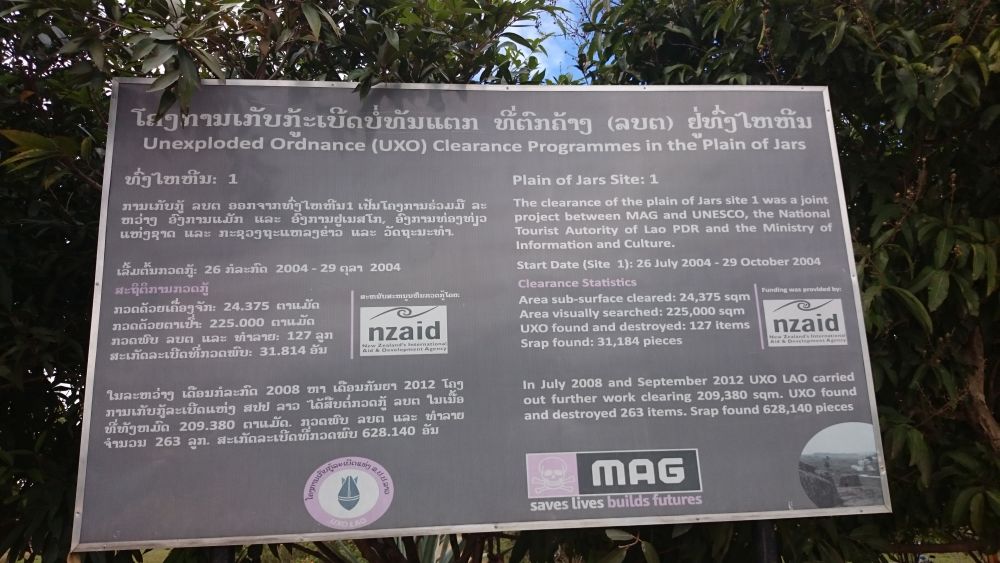 I just can’t get my head around these numbers. Stéphane calculated that they found an UXO every 28 meters on site one. Every 28 meters!!!!!!!

And every so often you find one of these 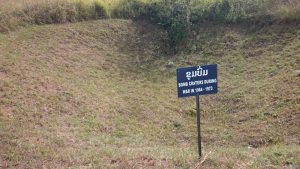 And in between all this destruction and war thoughts there are these jars, which are until today one of the biggest mysteries on our planet. 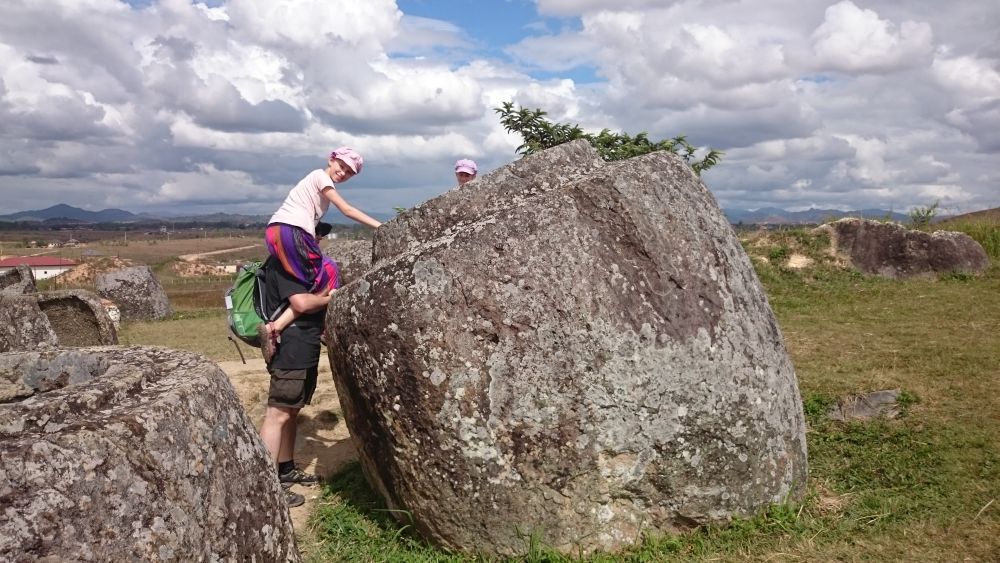 After some heavy negotiation about the price and a short lunch break, we headed for Vang Vieng. Those 234 km took us 7 hours. 7 hours of heavy rain, bad to no visibility, bad streets, feeling sick but NOT throwing up this time and no break. We finally arrived at 10pm, tired and started looking for a guesthouse. The one I had wanted to go to was already closed but right opposite we found a decent room, had a shower and went to bed.