Today must have been my favorite day of our time in Scotland so far. I remember again why I love Scotland so much. The nature was today mind blowing.

The day didn’t start off all that bright however. I tried to book a ferry to Orkney and failed a few times. At some point I even thought the Universe is trying to tell me something. But I am stubborn and so I tried after breakfast one more time and it worked. So we will be spending a w’end on the island in August. I have never been there before and I very much look forward to it.

Then we took the car and just drove. The idea was to go where the road would take us and the first stop was Kinloss Abbey. In the past I would have bought a postcard to have a photo of the Abbey, then later I would have taken an analog photo if the weather would have allowed it, in recent years a quick thoughtless pressing on the button of my digital camera would have given me the wanted result. But I have moved on from that. So what you guys get is a link to google and other people photos which were taken at perfect light conditions. So we wondered across the cemetery which is also a war cemetery for the Royal Air Force, looking for stone angels.

Then we left for Burghead. When we arrived there we walked to the visitor center and were recommended a walk to Hopeman. All that because I was dying for some fish and chips and there was no chipy in Burghead. So we started our walk towards Hopeman. God I could try to describe how very beautiful the view was from there. We saw the ocean, islands in the distance, small and large boats but no dolphins. The lady in the visitor center had told us that just the day before they had watched dolphins for about an hour. My hunting instinct were wakened. So all day I kept an eye on the horizon just to make sure I wouldn’t miss them when they would come. But they never came.

But that didn’t stop us from enjoying ourselves. This path is an old railway line that is now used for walking and cycling. First mistake: We didn’t bring our bikes. So we just used what we came with – our legs.  Second mistake: Wrong Shoes. Obviously I hadn’t thought that I would be walking for hours so I didn’t take my walking sandals but nicer ones, resulting in the most beautiful and painful blisters at the end of the day. Anyway we made it to Hopeman, found the chipy, bought our lunch, ate it on a playground, got ourselves an ice cream and then faced the walk back. By that time my feed were hating my shoes so that I had to take them off and walk barefoot. That in itself can be fun if it wasn’t for those little stones with sharp edges. But having to choose between even more blisters and hot soles of my feet I chose hot. It turned into a really funny game trying to avoid the small stones, finding the tiniest patch of green, balancing over big flat rocks and in between whinging loudly. Third mistake: No toilet paper in the backpack. Honestly I felt like a complete rookie. So nature had to step in and large leaves needed to be found. Around 18:00 we arrived back at our car. By then we had been on our feet for nearly 4 hours (8.6km), seen amazing countryside and were dead tired and sunburned. Fourth mistake: Coming to the coast without any sun protection nor hat. Well, good that Scotland is only my training parcours for the rest of the trip. 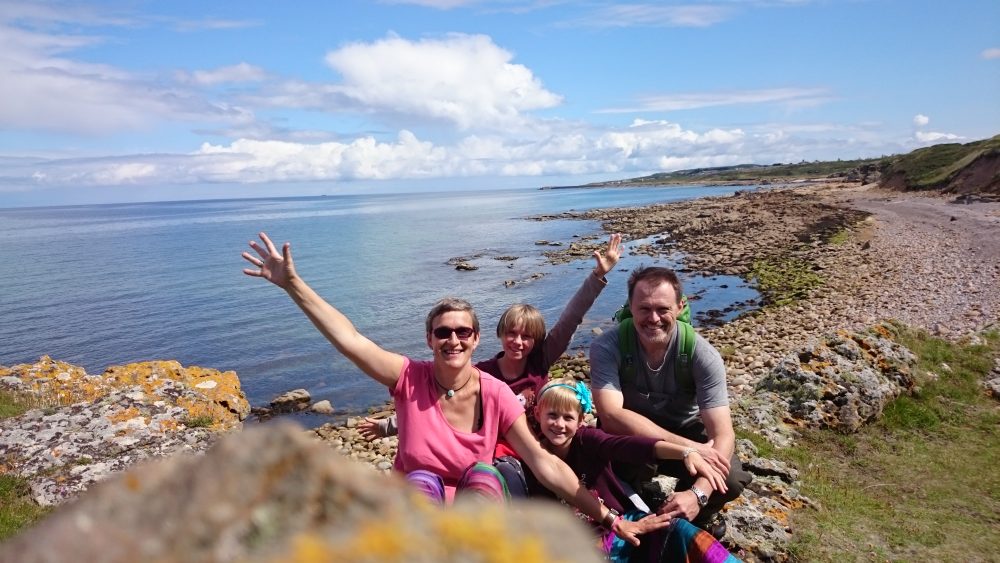