Don Khong – Don Khon and a lot of frustration

Because my days start usually before 6 am I get to see the most amazing sunrises. The whole place is still quiet and in those few minutes everything is ok. So today I am making you a gift: I am sending you our sunrise – video

Already in the bus to the 4000 islands I was unsure where we should go and this uncertainty kept creeping up on me. Was Don Khong really the best choice for us? Would we feel more at ease on Don Khon or even on Don Det. If you have to take a decision based on a book (Lonely Planet) than there is always a remaining risk.

In the morning I suggested to take the boat to Don Khon, have a look around and to decide if we wanted to move for the last few nights or not. The boat took us between all those tiny islands. Not all of them are really islands, sometimes there is just a tree or a bush looking out of the water. But it creates a calm atmosphere. On some of the bigger island there are people living.

After about 1 1/2 hour we arrived on Don Khon. Theoretically we would have had 5 hours on the islands before we had to take the boat back, but already finding a bike took nearly 40 minutes.

And the road signs didn’t help us finding our destinations either. 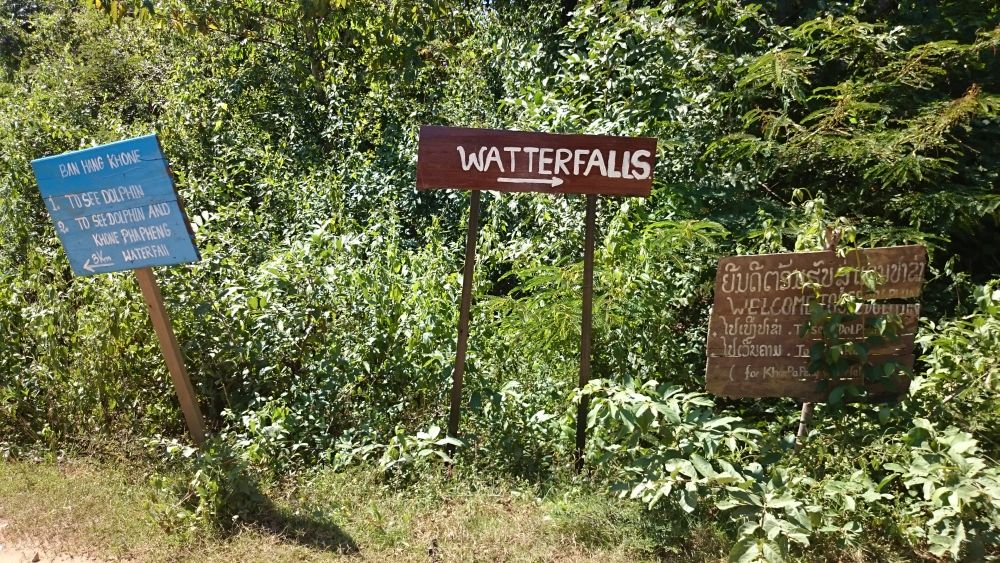 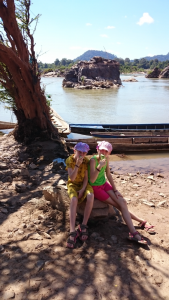 We didn’t find any of the waterfalls. And there are aparently several on the island. But we found a small beach called Long Beach, where we could go for a sit in the warm Mekong. There we met two ladies from Germany and it was nice to talk for a while.

But than we felt already the time pressure. The kids were getting hungry so we returned to the main “town” to eat something. We found something but I was not happy there. For the first time in three weeks I cleaned the table cloth with some vinegar and the soup that we ordered was also not quite my taste. You can hear it – this was not my day. The later the day the more I felt annoyed and frustrated. But I hadn’t reached the peak yet. We took our bikes to the guesthouse I had thought of taking on that island and I couldn’t believe it: this was a dream come true. Calm. Directly overlooking the Mekong. A terrace with hammocks. I was so disappointed. I really had made the wrong decision by not coming here. But at least we wanted to order some fruit shakes and relax a bit on the terrace before taking the boat back. We ordered but it took time to get the orders done, so that in the end only Lara had her drink and we three had to cancel our order not to be late for the boat.

On the way back we kept asking at travel agencies if they knew how to extend our visa. This is the annoying thing. Our visa runs out on Saturday. And we could have easily extended it in Vientiane. But we didn’t know three weeks ago that we would find now such a nice place for a holiday. Down here we probably would have to go to the Cambodian border and get it done there directly. For that we would have to rent bikes, drive for over an hour there, hope everything would work, come back, pack our bags, move to Don Khon – and we would have only three weeks in Cambodia, because we have a flight out on a given date. We turned this problem around in our head for hours, there isn’t a perfect solution.

So somehow frustrated I went to bed.