Today was bliss. There was nothing bad about it. It started with me finding a really nice place for breakfast by pure chance or universal magic. There we had enough freshly prepared food that lasted us until lunch time without a problem. And the coffee – amazing. And I really like coffee. So if I find a place where I really like it – than it is something special. So if you come to Battambang, go to the tomato Guesthouse and sit upstairs on the roof terrace. It is great.

Then we went quickly back to our hotel where Chan our tuk tuk driver for the day was already waiting for us. What now followed was a quick overview over the finest Cambodian craft skills: 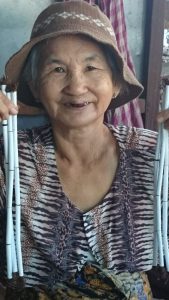 We started off with this 70 year old lady, who has been rolling cigarettes since she was 12 years old. It was just amazing to watch her do it and the girls also had a go. In Cambodia only the man smoke. If a woman smokes it is seen as impolite. But this lady is special. She doesn’t smoke, she just chews the tobacco. And when Lara started scratching her mosquito bits she used the chewed tobacco and rubbed it on those places. Apparently it is also a healing plant.

Many man smoke in Cambodia. No wonder. She is selling 60 cigarettes for 1 Dollar. Must be heaven for some people.

Then our next stop was this lady. She and I guess her husband were making rice paper for spring rolls. This we had seen already in Laos and 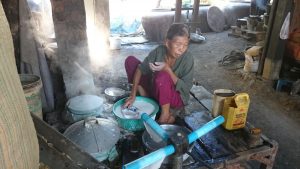 the principles were pretty much the same. Rice flower and water get mixed. This mixture gets than spread on a cloths under which there is boiling water. A second later the rice paper is being taken off and put on a bamboo support for drying. They can produce 2500 of these rice papers per day and are selling 100 for 1.5 Dollars to the people who are than taking them to the market and are selling them there for maybe 2 Dollars. 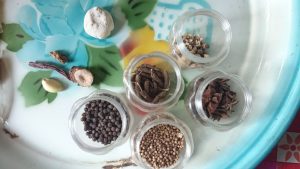 Around the corner we learned how local people are making rice wine, which is in fact not really wine but more a rice spirit,  out of these ingredients: peppercorn, cardamom, anise, garlic, ginger, coriander and rice – obviously. A nice description I found here. The local people drink it at 30%, but to foreigners he is selling it at 40%. We tried a bit and because it was really nice we bought ½ liter for – now I hope you are sitting down – 0.5 Dollar. Unbelievable. 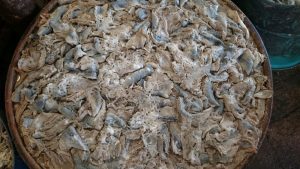 The next stop was one of the most disgusting things I have ever seen: the fish market. It was not what I had expected. What you are seeing here is a mixture of fish and other stuff to make a cheese that can be added to a fish soup but is also a way of conservation. The smell in this place was so strong that the girls gave up very quickly. But I was curious and wanted to see it. We also saw how they unloaded large fisher boats, filling huge baskets with maybe up to 100kg of fish and then carrying them from the boat up a little slope to the street. There were always 2 men carrying the basket and there were 2 changes of people on the way because it was so heavy. The guy in the boat was STANDING in the dead fish-water-soup and filled the baskets from there. Hard physical work. Very smelly. 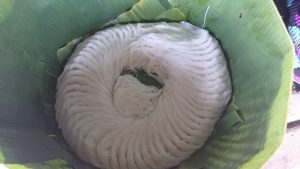 Our last stop before lunch was a place where they made rice noodles. Again they used a rice flower – water mixture. But instead of steaming them to thin crepes, they pressed the dough through a sieve into boiling water. Once cooked they washed them, cut them and prepared beautiful baskets with them. It looked so appetizing that we took a bit for our lunch.

Then we had some lunch and relaxed a bit in our rooms. Just before we needed to leave 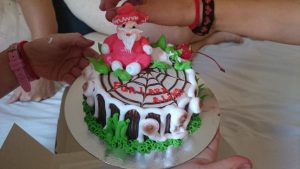 again, the girls had a bit of a surprise in front of their door. Nicholas had sent them a package with a little sweet present which was eaten in no time.

Each year on December 6, Germans remember the death of Nicholas of Myra (now the Anatolia region of modern Turkey), who died on that day in 346. He was a Greek Christian bishop known for miracles and giving gifts secretly, and is now the patron saint of little children, sailors, merchants and students. Known as Nicholas the Wonderworker for his miracles, he is also identified with Santa Claus. Beliefs and traditions about Nikolaus were probably combined with German mythology, particularly regarding stories about the bearded pagan god Odin, who also had a beard and a bag to capture naughty children. (more on that here) 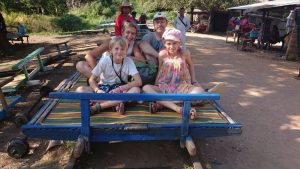 Then we set off to another adventure: a trip on the bamboo train. For all around Gurmels … dies ist nicht zu vergleichen mit unserem Schienenvelo. The whole thing was built because the old rain tracks were not used for anything and the local people made the most of them. An engine pushes the vehicle forward and it is quite scary at times. The whole trip ends at an old abandoned factory where they had produced mud bricks.

Chan, our tuk tuk driver, had to rush than to make it in time for us to see the bats leaving a 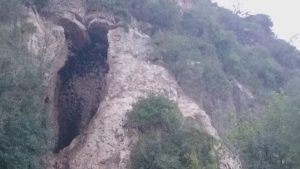 huge cave. When they finally came out, there must have been several million bats, it was
very impressive to see and a bit scary again. Before we drove back to the hotel we climbed a few very steep steps up to see the Buddha face, that was carved into the rock. Apparently it wasn’t finished but from where we saw it that was not visible. Just before dark we made it back down, and left than to go back to our hotel, where by 10 pm everybody is really tired and ready for bed.