Holiday. Sand. Beach. Water. Relaxing. We have finally arrived at that place. Initially we had wanted to go to Koh Rong, but all the accommodation we had looked at was either fully booked or too expensive. And since we had wanted to go to Rabbit island (Kaoh Tonsay) anyway, we had decided to come to Kep directly which is right opposite Rabbit island on the main land.

Lara woke me up at some point and said she had a headache and me feeling her forehead confirmed my initial thought: temperature. I have the impression her body is making temperature every single time she needs a break. We had the same already in Siem Reap. So I was not so worried, gave her something against the headache and decided to let her rest for the whole day.

That meant I had a day alone with Aline, since Stéphane wanted to work for a couple of days. There will be no WiFi and only limited energy on Rabbit island, which means he can’t work there.

There is not much to do or to see in Kep. But one thing is fantastic: the crab market. The very first things you see when you get to the market are those beautiful green fishing boats on the water. 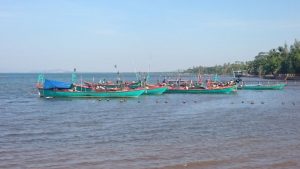 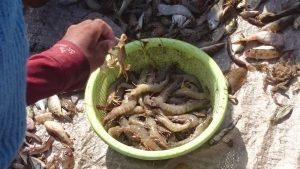 The crab market itself is not very big. But we saw fresh fish, fresh seafood, we saw how the women sorted between crabs, prawns and fish, how they were bitten every so often by a crab and cursed. We saw the containers in which they keep the fresh crabs. We just stood there in wonder. Alina was worried of a crab biting her. But nothing happened. We saw how the calamari were cleaned. We saw how the fish was prepared for eating. Everything. The second part of the crab market is like an outdoor restaurant. Various woman have their grill and some of them have also table and chairs. Everything that we saw fresh, was here also for eating. 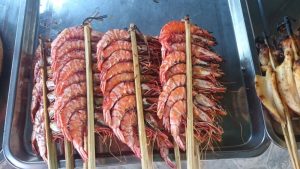 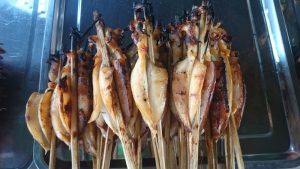 After having seen all those delicious things I knew where I wanted lunch. But it wasn’t time for eating yet so we walked along the coastline to Kep beach. The beach is not big but 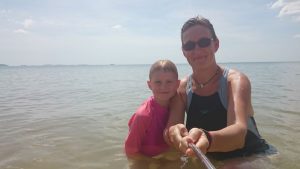 pretty empty. At some point we counted 13 foreigners and a couple of local families. That was it. The water is so warm and shallow that we just sat in it, played, and enjoyed ourselves.

For lunch we met the rest of the family at the crab market and than we spend the afternoon slouching. Lara heard Harry Potter. Alina played a few games, did some maths. Stéphane worked and wrote a bit. Holidays are here.