After two days in “his office” and two days in the hammock both Stéphane and Lara joined the rest of the family on our day out.

We wanted to explore the surrounding of Kep and needed to rent a scooter for that again. The thought alone already made me nervous. The last experience in Laos was still vividly in my memory but apart from hiring a tuk tuk driver for the whole day, there is no way here to get around. In fact, travelling in Laos was much easier (and cheaper) because there are public buses. In Cambodia there is nothing like a public bus. There are many privat bus companies, having their bus station all around and selling their tickets for different prices. So I am spending much of my time going from agency to agency asking about the price 🙁

Anyway, the night before we had a real tropical rain and when we woke up in the morning everything was still wet and clouds were all above the Kep National Park. I really didn’t fancy driving in these conditions so we just waited a bit but somehow the weather didn’t change much. So finally we decided to give it a go.

The first kilometer I was going so slow on that thing that if I had gone any slower, I could have walked. The scooter was heavier than the one in Laos and I was so worried of falling and insuring not just me but also Alina who was sitting behind me. 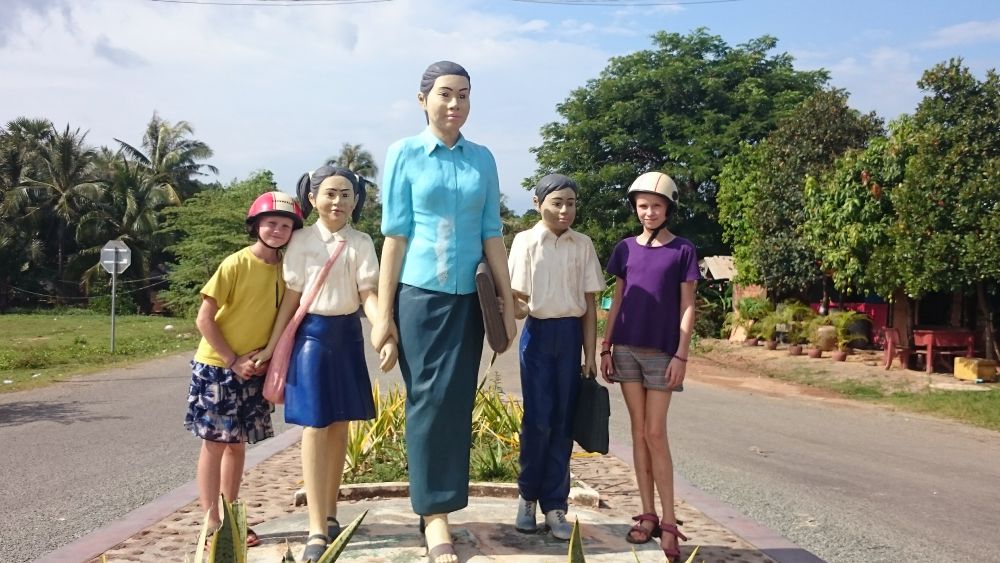 After about half an hour we had to leave the normal street and had to go on a dirt track. I tensed up so much, that I could feel my arm muscles constantly. Now I was going even slower. 20km/h was my maximum. Finally we arrived at the pepper farm and were welcomed by some volunteers. She showed us around and shared some really interesting facts with us. 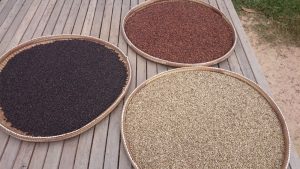 Did you know that all four peppers (green, black, red, white) come from the same plant?  I didn’t. The green is the fresh pepper on the plant but unripe. It gets red when it is ripe. The black pepper you get, when you dry the green one and the white pepper you get, when you boil the red pepper in water. That gets rid of the skin and you are left with white pepper. The one we visited is an organic pepper farm, so they don’t use any chemicals but all natural pesticides if needed. And they are running a fantastic little cafe. We had a delicious ice coffee and the girls an even better banana shake. When we talked about what we do next several ideas were in the air. Finally we decided to stay for lunch and then continue to a little lake for a swim. 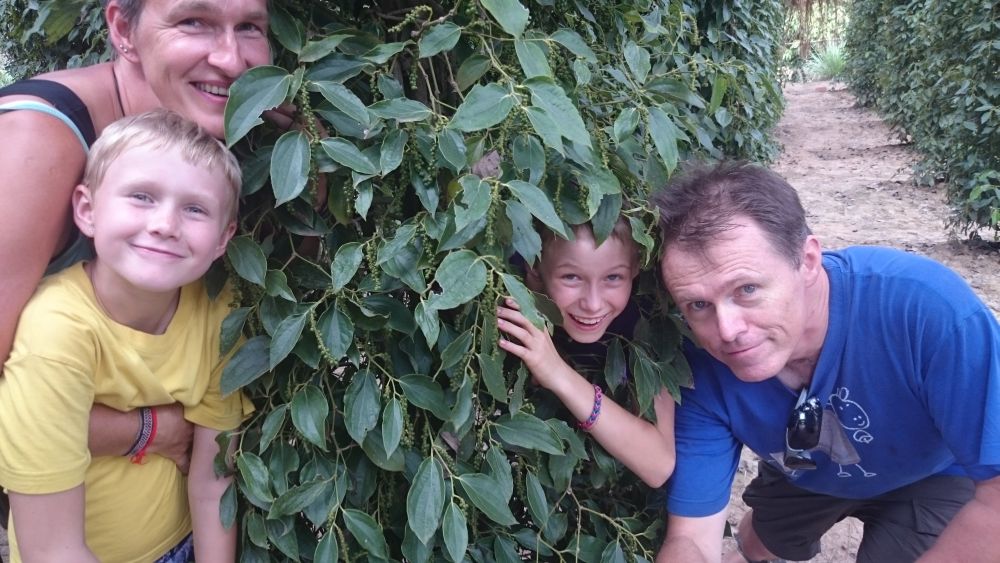 Fed and happy but not more confident I sat back on the scooter and we continued along the dirt track. We found the little lake but no place for swimming so we just left in on our left and continued our drive. Our destination was Wat Kiri Sela – the  Kampong Trach Cave.

This Buddhist temple sits at the foot of Phnom Kompong Trach, a dramatic karst formation riddled with more than 100 caverns and passageways. From the wat, an underground passage leads to a fishbowl-like formation, surrounded by vine-draped cliffs and open to the sky. Various stalactite-laden caves shelter reclining Buddhas and miniature Buddhist shrines.

At the wat, note that friendly local kids with torches (flashlights), keen to put their evening-school English to use, are eager to serve as guides. Make sure you tip them if you use them. (Lonely Planet) – and that is what we did. Not that we would have really needed the girl, but I wanted to give her something for helping us out with her flashlight. Wat Kiri Sela has a sad story to it like many Buddhist places in Cambodia. The Khmer Rouge removed a lot of the heads and hands of the Buddha sculptures while they were ruling (1975 – 1979). Today they are repaired but one can’t imagine what is must have been like living in Cambodia during those four years.

The site itself is amazing. And we were lucky to have a moment all alone to ourselves inside. We just stood there in the middle of the formation and heard NOTHING. No birds. Nothing. This is a sacred place. A special atmosphere.

When we left the place we took the most direct route back avoiding all the dirt tracks. That brought us back to Kep while the sun was still up because I wanted to have another look at those empty French villas I had seen the day before with Alina. And there are so many. It is unbelievable. Whole streets are left empty. One of them we could even go in and we saw that squatters are living there. These houses must have belonged to the rich of the richest. They are overlooking Kep beach, have a hug garden usually and are all fenced in. Now they are just empty shells. Somehow sad.

Alina wanted to have some more crab for dinner, so that we stopped at the same restaurant we had been the previous day, ordered a cocktails to enjoy the sunset in style and some food. I wasn’t hungry, so that I just finished the doggy bag from lunch and then left the three arguing. A situation that is happening not so seldom. And I am then often the mediator. And since I didn’t feel like doing that again, I went back to the guesthouse to prepare my backpack.

Usually this would be the end of my writing, but this night was eventful. When I had finished preparing my bag, I started looking for a guesthouse in Phnom Penh. While I was sitting on my bed, reading the Lonely Planet and comparing prices and reviews I didn’t feel well at some point Stéphane had to continue so that I could lie down. Well, and then the fun started. I don’t know what the reason was, if I had eaten something bad, if it had been the cocktail or the green pepper corns I had tried, if I had had too much sun of if my body just wanted to detox – no idea. But for the coming hours food left me all possible ways simultaneously until there was nothing left in me and I was so exhausted that the only thing I could do was to “drop dead on my bed“. I don’t remember when I was the last time so sick. And nobody to hold my head or clean after me – mum, I missed you.