This morning was clearly girly time. Stéphane was not so interested in going to the Apsara Art Association to see some traditional Khmer dance and stayed in the guesthouse to work a few hours.

In the Lonely Planet I had read that their dance classes could be visited from 7:30 am until 10:30 am. So we left the guesthouse even without breakfast to be there not too late. Our tuk tuk found the street and drove straight past the number. I didn’t even have a chance to say something. At some  point I got him to turn around and we started to look again for the right address. Eventually we found it only to be standing in front of closed doors. I got the Lonely Planet out, called the number and was told the school had closed. Great ! So we took the same tuk tuk back to the guesthouse and had breakfast. Perfect beginning to a new day 🙂

After breakfast I called the school number again to ask for some ideas where we might have a chance to see some Apsara dancing and was advised to go to the Royal University of Fine Art, which was perfect since we wanted to visit the Royal Palace this afternoon anyway and both are just next to each other.

Off we went towards the Royal University but in fact never made it because we found by poor chance probably my favorite street in Phnom Penh and needed virtually hours for a couple of 100 meters. 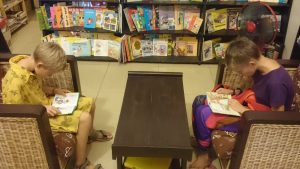 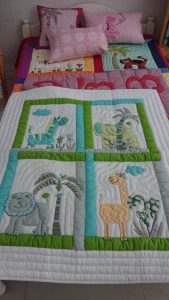 … shall I continue…? This is THE street and it leads directly to the Royal Palace 🙂

When Stéphane finished his work, he joined us for lunch. And with an ice cream in our hand we walked towards the Royal Palace. (note… just in front of the chocolate place we met the 2 German women, who we had met in Laos on 4000 islands while swimming in the Mekong on our day on Don Khon) 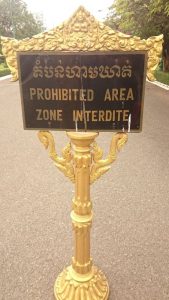 Being the official residence of the King, parts of the massive palace compound are closed to the public. (Lonely Planet)

Let’s just have a bit of history. To get a feeling of how power, influence and money are working in Cambodia, one has only to read a few lines of the late King’s Biographie: twice king of Cambodia (1941–55 and 1993–2004), who also served as prime minister, head of state, and president.

And the Royal Palace is a MUST when one is in Phnom Penh. The cloth rules to get in are just as strikt as in Angkor Watt. So Stéphane in his shorts was at risk not to get in at all. I put my trouser legs back on, put a long sleeved t-shirt on top and he loosened his belt a bit, so that he could pull the shorts down slightly. It worked. But since the King doesn’t have much money, the entrance fee is for all people older than 6 years 6.25 US Dollar. Children pay the full price so that the King can pay for his next meal. I do understand that. We have talked to the girls and have explained that we can’t help every beggar we meet on the street but that in between we do our share. So today we helped the King and to make the most of the money spent we challenged ourselves to take a family photo in front of every stop on the official map but we failed miserably. 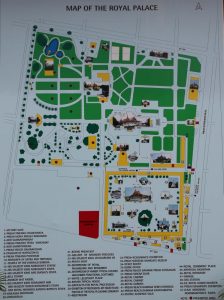 That is all we managed. The problem is the time. The Royal Palace is open in the morning for 2 hours and in the afternoon for 3 hours. We were there around 2:30 pm and were one of the last to leave the compound just before 5 pm. There is so much to see and so little time that in the end it was a rush and we got on each others nerves.

The Silver Pagoda is definitely one of the nicest things I have seen here. It is a bit like the British crown jewels.

Within the Royal Palace compound is the extravagant Silver Pagoda, the floor of which is covered with five tons of gleaming silver. […] The staircase leading to the Silver Pagoda is made of Italian marble. Inside, the Emerald Buddha […] In front of the dais stands a life-sized gold Buddha decorated with 9584 diamonds, the largest of which weighs 25 carats. Created in the palace workshops during 1906 and 1907, the gold Buddha weighs in at 90kg. Directly in front of it, in a Formica case, is a miniature silver-and-gold stupa containing a relic of Buddha brought from Sri Lanka. To the left is an 80kg bronze Buddha, and to the right a silver Buddha. On the far right, figurines of solid gold tell the story of the Buddha. (Lonely Planet)

The Silver Pagoda was mainly left untouched by the Khmer Rouge, apparently trying to show that they preserved their country’s culture and inheritage.

Totally tired and sweaty we left the Palace and went for a drink in a bar overlooking the city. Nice. Stylish. Above our budget. And we underdressed.