We got up at 5 am, took the taxi at 5:30 am to make it to the bus station for the 7 am bus to Kinpun, the town from where the people go up to the Golden Rock. The bus trip was eventless. The fun started later, when we joined the tens of hundreds of Burmese to go up there.

Now imagine this: A truck with about 8 rows, each packed with 5 or 6 people – depending on how much the people wanted to pay. No room in front. We were sitting so tide, that arms were touching. We had Alina on our lap to save some money. Then we left and started the ascent to the mountain top. But first there was a check point, if the truck was full enough. And then another stop for the religious beggars to have a chance to get some money. And then another stop for more religious beggars. Another stop when we even listened to some recital in the local language, so I don’t have any idea what they said. But they wanted money, that was clear. The air was hot. The sun was burning down. But I am glad we did it that way. There were only two other tourists on the truck with us. I feel it’s valuable to travel like the locals, even if it means to suffer for a while. 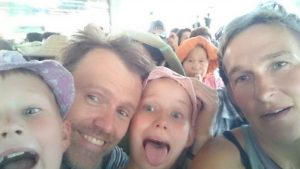 Finally we made it to the top. Then getting off the truck was another experience. The truck stops at a mobile ladder. People are pushing faster off the truck than down the ladder. Which left me stranded on the top only holding on to Stéphanes hand for some stability and balance. When we finally made it down that ladder, we walked towards the Golden Rock, the last part without our shoes, which is generally no problem, we had done that also at the Shwadagon Pagoda, but here the floor was not clean. There was rubbish everywhere I could feel it under my feed the whole time. And then there is all that reddish spit out stuff that they chew and then spit out – disgusting. 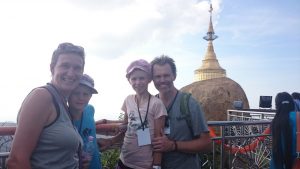 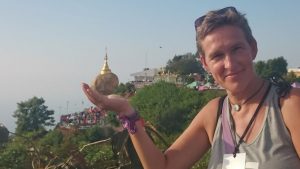 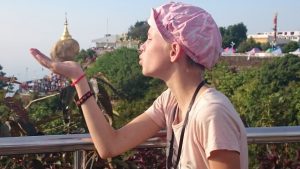 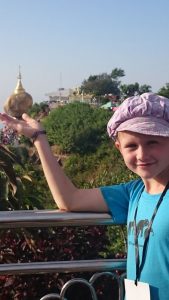 It is amazing up there and it would be even greater when women would be treated the same way as the men. Women are not allowed to go close to the Golden Rock nor touch it. MAN ONLY. Stéphane could have gone but didn’t want to. So we actually made our way back down. Enjoyed some good street food and went back to our luxurious guesthouse.

Our room was about 2×4 meters. There were two double beds and a bed side table in between. In front of it we placed our backpacks. Two people could not move in the room at the same time. In fact there was no moving in the room, just an opening the door, getting in and than into bed. The wall was made of thin material which meant you could hear EVERYTHING from the corridor. Our room was right opposite the bathroom and toilet, where the lights were left on the whole night. Since the top of the room wall was just a mosquito net, our room was brightly lite the whole night. And we could here everybody going to and coming from the toilet. I didn’t get much sleep. So I was not unhappy to leave after one night.
Share
168 / 419