Last day of the year !!!! No stress of getting the house clean, preparing a big dinner or having to decide what to wear for a big party, when was it actually the last time that I have been to a big New Years Party? I can’t remember.

We went instead to go on a boat trip from Mawlamyine to Hpa-an on the Thanlyin River. The map shows the road map, just imagine going on the river. Those 4 hours will be some of the best ones I have spent in Myanmar. Breathtakingly beautiful.

We arrived just around 12:30 and first went to a guesthouse hoping we would get a room. And we did. This is around NY not so obvious. But we were lucky. From there we explored the city, did some shopping in a department store not knowing where 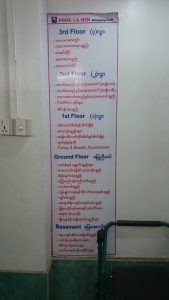 things were and talked to a really talented young Burmese, who is studying English in Thailand, doesn’t know where is mum or dad are, has no brothers nor sisters, draws beautiful mind blowing portraits and social topics showing images with charcoal, had been living in Thailand nearly all his life illegally and just gotten his study permit a few years ago, who works three days a week and studies two, who is in a rock-pop band which is writing their own songs, who speaks 5 languages… so you guys can imagine we talked a while. This chap is amazing and I so much wish him well in his life, wish him he can fulfill all his dreams after having had not the best start ever. He actually took our family portrait. 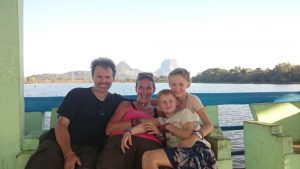 Anyhow, afterwards we walked towards the sunset.

And finally to a Burmese restaurant were we had an amazing traditional meal. Now they did have a menu, but here the locals just open the saucepans and chose by looking at the dishes, we did the  same. And for 10 Dollars the four of us ate like kings.

Afterwards we wanted to count our blessings of 2015 using the Buddhist prayer bead necklace that we had bought the day before and went to a temple, but we didn’t get far, they were locking the doors. Back in the guesthouse Alina had a moment of seriously missing her grandparents which meant we did a few skype calls. Although being very very tired, both girls managed to stay awake until midnight for the very first time in their young lives, we saw two fireworks and then the girls dropped dead in their beds and the two of us had one sip of a local whisky each before we retired too.