Alina and my day started ridiculously early at 3 am. We got up, got dressed and went in search for a motorbike taxi that would bring us to the Mahamuni Pagoda. There every morning around 4 am the face of the Buddha is being washed and Alina wanted to see that. And what a ritual it was…

Around 4:20 am the outer gate of the pagoda was opened and the waiting people rushed into the compound to be as much in the front as possible. Since we had been there before 4 am we made it into the first row of women. Just to remind you: man are allowed to go all the

way to the Buddha, women are not. Then around 4:40 am they opened the two golden gates before the Buddha. Music was playing and monks brought some flower arrangements in. A table was put up in front of the Buddha where the flowers were placed. Then a monk appeared and was presented with each flower arrangement one by one and lifted it in Buddhas direction. The blessed flowers were than taken outside by other monks and the big Buddha was covered with some yellow linen before the monk started to spray it, “brush” its teeth and wash its face. Then the face was dried and polished with several cloths. When the monk took the fourth or fifth cloth we decided we had seen enough. Alina was tired and we left and went back to the guesthouse and to bed.

An hour later it was time to get up. Stéphane wanted to take again a day in the office and Lara didn’t feel like doing anything with us, so Alina and I rented bikes yet again and continued to explore this amazing city. First we went to the train station to get our tickets for the next day and then our path took us to the Gold Pounder’s District. There we found out how they make gold-leaf sheets. It was really interesting. The pounding is done in three stages:

Only then the gold is so thin, that they use it to make the gold-leaf sheets that are later sold to men who are offering it to Buddha. We saw that at the Golden Rock and also at the Mahamuni Buddha. Only bare feet men are allowed to do the pounding and women are not allowed to get closer than this… for the same reason why women are not allowed that close to Buddha or the Golden Rock. There were women working in a glass room next door, where they took the pounded sheets and made sure that each sheet had exactly the same amount of gold on it. 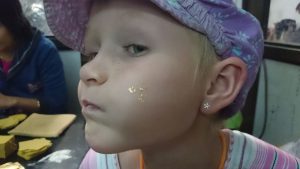 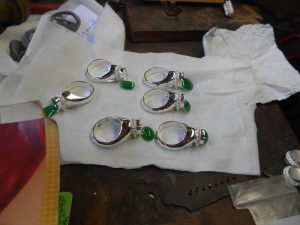 Our next station was the jade market in Mandalay. First we stumbled across a workshop where they cut the large jade stones and start the process of making the bracelets. And later we found the actual jade market where sellers and buyers are trading stones over a cup of tea. We learned that the greener,  the more transparent – the more expensive the stones are and that the yellowish jade is cheaper than the green jade. One can spend easily 600 US Dollar on a jade bracelet here. From looking at the shops it appears that the jade market is well into Chinese hands.

After lunch, which we had on the jade market, we met a German couple and talked for a while together before we went looking for our bikes. We had left them outside of the market and since my phone had gone dead and I had forgotten the cable to connect the battery pack, we had to use my sense of direction and it got us back to our bikes and to the guesthouse – without a map, without being able to read the street numbers, without GPS – just by remembering what I had seen, and cycling a little bit around in circles. 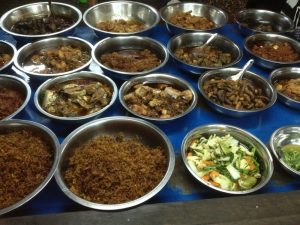 When we finally got back the traffic had been so bad that we didn’t feel like going out on our bikes again. Instead we followed the recommendation of that German couple and went to a really nice Burmese restaurant. We ate like kings and were the only foreigners present. The setup is always the same: there is a buffet with chicken, pork, goat and seafood dishes. With the chosen dish there is a soup, vegetables and tea served. It tasted absolutely delicious. 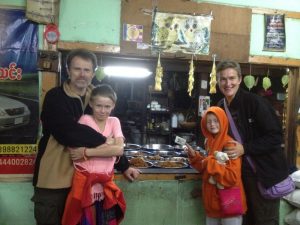 This was our last day in Mandalay and I loved it. Looking back, the only thing I really didn’t like was the taxi day around those different places. Everything we organised ourselves was great, the Burmese were always friendly, food was delicious and not expensive. We only saw a fraction of the city. We missed the royal palace, the district next to the river, the never made it into a market apart from the fruit and vegetable section. One could spend days – weeks here.