Today we woke up to a autumn like foggy morning mist. I could see my own breath when I was doing the washing early morning outside. At the moment we are wearing in the morning and after sunset not just long sleeves but also thick jackets, long trousers and socks. Then between 10 am and about 4 pm it is nicely warm. So we are working in layers, putting thing on and taking them off.

After a great breakfast at the guesthouse I had wanted to visit the Shan palace, but it was closed until the afternoon, so instead we went towards the market to look for longyis for the girls and maybe for me. 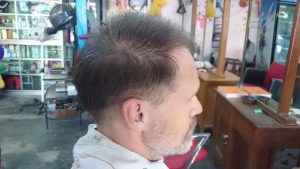 But first we stopped at a hairdresser because Stéphane was in serious need for a haircut. The girls had a lot of fun watching the people working there. A woman had her make-up done and several young men got a modern haircut. Stéphane paid for his Fr. 0.77. 🙂 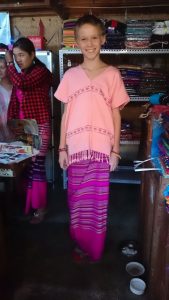 Afterwards we had to go directly to the market. Alina couldn’t wait any longer for her longyi. I can’t say how much time we spend there but it was a serious amount of time. Alina had found her favorite material relatively fast, but Lara didn’t find anything at the same place. So we wondered around the market looking left and right, looking at this color and at that color. In the end she found one and we went back to the first place to have both sewed. While Lara’s was easy to make, Alina’s took ages to finish and I had enough time to look for one for myself and sure enough I found two and just couldn’t decide which one to take. The girls were asked, photos to compare were taken, I even asked another woman – finally I made a decision and mine was also done in no time. The girls were wearing theirs straight afterwards and I hope I build up the courage to wear mine too. 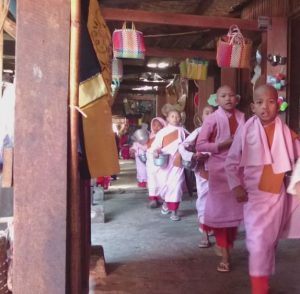 While walking through the market and also waiting for the longyis we heard and saw a number of times children-nuns coming around and asking for food and money. Some of them look as young as 4 – 5 years old. They become novice and go to school in the monastery. That way poor parents can give their children some education. Because if there is no money to pay for the school uniform the children can’t go to school.  Some of them stay for a few weeks, some for a few months, some all their lives.

Because we had taken so much time in the market it was already 2 pm and we were starving. So back to Mr Shake to order another fantastic shake and some food.

The Shan palace was only open between 3-5 pm so there was not much time and we went directly there. Before the military took over in 1962 the Shan had a system in place by which 33 regions were governed by 33 Shan sky princess. In 1962 all the Shan princess were arrested and years later released. All but one. The sky prince of Hsipaw. Until this very day his wife, the Austrian born Inge Sargent, doesn’t know what happened to her husband and the military junta never ever even confirmed that he had been arrested and put in prison. Today the palace in which family members are still living is open to visitors. The lady of the house, Mrs. Fern, talks about the family history and gives an overview over the historical event. We didn’t spend much time there but it was interesting to lean something about the Shan history.

Nothing really worth mentioned happened during the remaining hours of the day: some tea, some dinner, some writing, some reading, some family argument, some going to bed… tomorrow will be a long day. We are going trekking to a Shan village. 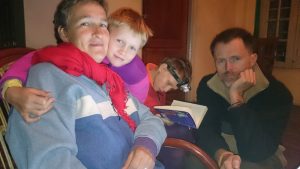