TODAY WE HAVE REACHED HALF TERM OF OUR 365 TRAVEL ADVENTURE.

Today we were on the Inle Lake and everything people say about it is true.

Yes, it is an open-air type museum.

Yes, it is highly overpriced.

Yes, most of it is a show just for the tourists.

Yes, the boat drivers are not all nice and friendly and speak hardly any English.

Yes, the floating market is a tourist rip-off.

Yes, there are more shops for tourists than anything else.

But, Inle Lake is still beautiful. We left the guesthouse at 6 o’clock and our boat went out onto the lake. It was kind of ghostly beautiful. It was still dark. Freezing cold. And every so often we saw another boat – just like ours. 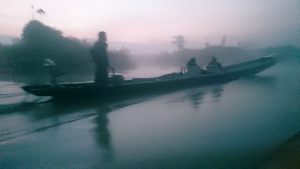 It took us a good 20 minutes to leave the canal behind us and to reach the open water of the lake. And then there was sunrise just over the mountains. Breathtaking. 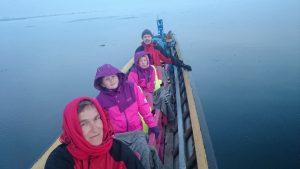 Our first stop was the floating market. And by “floating” they don’t mean on the water, they mean its location is rotating. It took us a moment to realize that. But before we hit the market we got ourselves two warm sweet teas to warm ourselves up after the boat trip. From the guesthouse we had gotten some breakfast boxes and now was the time to eat them – if only the guesthouse would have not only put toast, butter and jam in the box but also a knife. 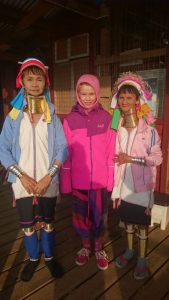 On the market there was a small section for fruit, vegetables and flowers, the rest was stuff for tourists. We went all the way to the end and found ourselves in a house where three women from the Kayan tribe were working.

Women of the Kayan tribe in Myanmar are well known for wearing brass coils around their necks their entire lives in order to lengthen it. The belief is the longer the neck, the more beautiful the woman.

The cultural practice does have its drawbacks. The brass coils can weigh up to 20 kilogrammes, making work in the fields extremely painful and difficult.

Curiously, the Kayan say this custom was originally established to make women less attractive, thereby protecting them from being kidnapped by rival tribes. Nowadays, they are worn to preserve cultural tradition.

Girls begin to wear rings around their shins and necks at the age of five or six, but it largely depends on the wealth of the family. Traditionally, the rings are expensive and not every family can afford it. Sixty-years ago, the price could reach 20 kyatts (2 US cents), but now it costs as much as 250,000 kyatts ($250).

Today, most younger women in the villages of Kayah state choose not to wear the rings, saying it as an antiquated practice. Across the border in northern Thailand, however, the neck rings have recently surged in popularity, attracting curious tourists and revenue for villagers.

The girls were quite shocked when they saw the women and we talked for quite some time about some other examples of disfiguring culture rituals in the world.

Eventually we left and had a look at some silver and gold workshop but left it without having spent any money and that although Alina had found a nice ring, a nice bracelet and even Stéphane had put on a couple of rings.

Our next stop was a weaving workshop. Now we had already seen some silk weaving in Laos and had even visited a silk farm, but here at Inle Lake they also use the lotus flower for weaving. For a 2 m long scarf they need 4000 lotus plants and for that reason the material is 7x more expensive than “normal” silk. We spent quite some time in the workshop and Alina had even found a scarf for herself. But we are also trying to be responsible tourists and I casually asked how much the women earn for their work. We were told that they earn between 1000 – 1500 kyats (just over $ 1) per day and that they can make 3 scarfs per day. One scarf costs $ 8. So the owner of the workshop after paying for electricity, material etc. still makes probably $ 6 profit per scarf. I left it up to Alina to decide if she wanted the scarf or not. I would have supported her if she had wanted it but – I am so proud of her – it was her decision not to buy it, not because it was too expensive, no, because the women didn’t earn enough money for their work. It was not an easy decision for her, she really liked the scarf. I am having a daughter who cares more about fairness than about her own desire. Proud mum.

The next tourist attraction was the blacksmith. I am really not sure they are actually producing anything there. But there is a fire, there are men working and there is a long shelve with a lot of very useful and useless things to buy. And I am proud to announce that after months of searching we have finally found our garden bell, that we will install as soon as we are back home, hoping that when ringing the bell, the girls will actually hear us and come. J 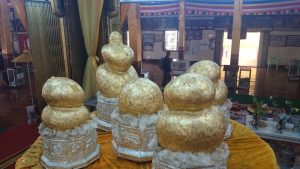 Then we stopped at Phaung Daw Oo Paya, the holiest religious site in southern Shan State. Enshrined within the huge pagoda are five ancient Buddha images that have been transformed into amorphous blobs by the sheer volume of gold leaf applied by devotees.

My favorite place today was Inthein. After a short lunch stop in a restaurant along the way we climbed up the mountain just behind the village. We hadn’t even 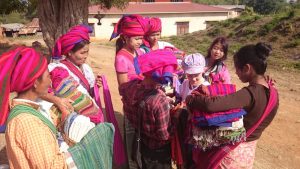 reached the first group of ruined stupas, Nyaung Ohak, when we bumped into this group of women selling scarfs. As soon as they had seen us approaching there had been a run for the paying tourists. First we wanted to continue straight away but then Alina wanted to have a look at what was on offer and sure enough she found one that she liked. After the previous difficult situation I didn’t even negotiate the price but just paid and left. BUT we were not leaving alone. Oh no, three of the sales women walked with us and tried to sell some more. One, with a baby on her back, was especially persistent and kept on 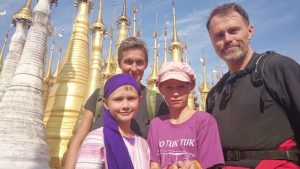 offering. “For good luck” – she called it. Being a mum myself, this was a really difficult situation for me and after about 10 minutes I gave in and we picked a second scarf. But I didn’t feel bad about it. No, I explained to the girls that this is also helping. I bought something today from a person who doesn’t have much. This is also helping for me. We left Nyaung Ohak behind and reached Shwe Inn TheinPaya, a complex of 1054 – or more – weather beaten stupas. Walking around these stupas was amazing. I had never seen anything like it before and I could have spent hours up there, but we were pretty much aware that our driver was waiting. So down we went and left for Nga Hpe Kyaung (Jumping Cat Monastery).

The monastery is beautifully located just besides the floating gardens. The interior is all wooden and the Buddha sculptures are very unusual. But even more remarkable was the huge mediation hall and all its not so straight pillars. The floating gardens are fascinating. The farmers grow tomatoes, squash and other fruit and vegetables on long wooden trellises supported on floating mats of vegetation. When a boat drives pass them the whole garden section is dancing on the waves.

We didn’t see sunset on the lake, I guess we hadn’t paid for that luxury item but nevertheless it was unforgettable. And like I said at the beginning, we know that the fisherman that we all know from pictures are exactly that – a reminder of times long gone and 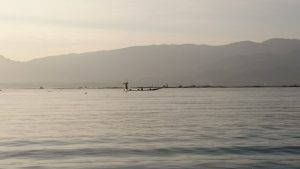 are now only a highlight for everyone with a camera. But Inle Lake is even with all those drawbacks a highlight of our visit of Myanmar and with a delicious Indian meal on the night market we let the day come to a gentle finish.