Our last day in Myanmar. Tomorrow at the airport doesn’t count 🙂

What does one do on its last day in Bagan and in fact also on the last day in Myanmar? Go and see some more temples 🙂

For the first time in four days Bagan, we actually prepared, ticked off all the ones we had already visited and marked the ones we wanted to see, narrowed it down to 5 and reserved two e-bikes for the day.

We started our adventure going to Sulamani and I am so glad we did it. It is beautiful. Inside and outside. And we were nearly alone there.

This temple with five doorways is known as the Crowning Jewel and was constructed around 1181 by Narapatisithu. It is one of Bagan’s most attractive temples, with lush grounds. It’s a prime example of later, more sophisticated temple styles, with better internal lighting. Combining the early period’s horizontal planes with the vertical lines of the middle period, the receding terraces create a pyramid effect. The brickwork throughout is considered some of the best in Bagan. The gilded sikhara is a reconstruction; the original was destroyed in the 1975 earthquake. The interior face of the wall was once lined with 100 monastic cells, a

feature unique among Bagan’s ancient monasteries. There’s much to see inside. Carved stucco on mouldings, pediments and pilasters represent some of Bagan’s finest ornamental work and is in fairly good condition. Glazed plaques around the base and terraces are also still visible, as are many big and small murals. Buddha images face the four directions from the ground floor; the image at the main eastern entrance sits in a recess built into the wall. The interior passage around the base is painted with quite big frescoes from the Konbaung period, and there are traces of earlier frescoes. (Lonely Planet)

For me this one was amazing. The paintings in the inside were rich and very expressive. The outside sandstone work was exquisite. I could have spend hours just wandering around and here for the very first time I would have loved to have a competent and knowledgeable guide who could have explain and pointed out a lot of details to us. This is something not easy to find. I had overheard quite a few German and English speaking guides and not all of them have good language skills.

Facing Sulamani from the east, and well worth visiting, this sikhara -topped temple looks like a miniature version of its more famous neighbour, but sees far fewer visitors (or vendors). Thabeik Hmauk means ‘Boycott Temple’, as it was made in response to the similarly designed Sulamani, which was ordered by the brutal king Narapatisithu. Much of its interior was damaged by the 1975 earthquake, but there are multiple stairways up to a wrap-around meditation chamber with little light.

There are two outside terraces, reached by narrow stairs, with superb views. (Lonely Planet) IF ONLY…

if there is something frustrating than it is this photo. We have been to so many pagodas, to so many, and every single time we found the same. A locked door. At some point we asked around if there was any temple inside staircase open and the question I was asked as an answer was: “What nationality are you?” Now, I was intrigued. What did my nationality have to do with anything? We were told that until the 1990 all staircases were open or there was a gatekeeper, than a lot of German art thieves came and stole a lot of the precious items resulting in all staircases being locked and the keys kept at a central government office. One German thief even wrote his name on the wall after taking a painting off. Imagine how stupid. Luckily he was caught at the airport. But for all the tourists now travelling to Bagan have to bear the consequences.

In Myinkaba village, stands this active and rather modern-looking pagoda, even though it dates back to 1059. It is named after Manuha, the Mon king from Thaton, who was held captive here by King Anawrahta. In the front of the building are three seated buddhas; in the back is a huge reclining buddha. All seem too large for their enclosures – supposedly representing the stress and discomfort the king had to endure.

It is said that only the reclining buddha, in the act of entering parinibbana (final passing away), has a smile on its face, showing that for Manuha, only death was a release from his suffering. But if you climb to the top of this paya (can’t locked) via the stairs in the back (ask for keys if it’s locked), you can see the face of the sitting buddha through a window – from up here you’ll realise that the gigantic face, so grim from below, has an equally gigantic smile. (Lonely Planet)

Frustration, even the information in the Lonely Planet our out of date.

Just south of Manuha Paya by dirt road, this shrine is said to have been used as Manuha’s prison, although there is little evidence supporting the legend. In this story the shrine was originally Hindu, and captors thought using it as a prison would be easier than converting it to a Buddhist temple. It’s worth visiting for its interior masonry work – sandstone block facings over a brick core, certainly some of Bagan’s finest detailed sculpture.

Perforated stone windows are typical of earlier Bagan architecture – in fact it was probably Bagan’s first gu -style shrine. In the central sanctuary the four stone pillars have finely carved sandstone bas-relief figures of three-faced Brahma. The creator deity is holding lotus flowers, thought to be offerings to a freestanding buddha image once situated in the shrine’s centre, a theory that dispels the idea that this was ever a Hindu shrine. The sides of the pillars feature ogre-like kala-ate heads with open mouths streaming with flowers. Legend goes that Shiva employed these creatures of Hindu legend to protect temples, but they proved too ferocious so Shiva tricked them into eating their bodies, then fed them flowers to keep their minds off snacking on worshippers. In the centre of the four pillars is an altar on which once stood a standing buddha or (some locals believe) a Hindu god. Ask at Manuha if the temple is locked. (Lonely Planet)

This is a little beauty, well worth a visit.

Around those last two temples we hunted down a couple of people asking where we might still be able to go up and where actually given three names. Because of time restrains we went only to one, but this one is a MUST.

Dating from the 13th century, during the latter period of temple building at Bagan, this huge, impressive pagoda is a superb sunset-viewing spot, with a giant open terrace (Bagan’s largest) atop the steps, and another small deck further up. The tour groups have discovered it so you’re unlikely to have the place to yourself. It is about half a mile southeast of Sulamani, reached by dirt roads that sometimes get obscured in goat fields.

Pyathada’s interior arches are still partly open to view. The architects used an inner relieving arch and a second upper arch to support the huge chambers, illustrating the point that temple styles changed in Bagan because the builders improved at arch construction. Note how the top stupa isn’t centred on the top platform. (Lonely Planet)

Now look at the view we had. 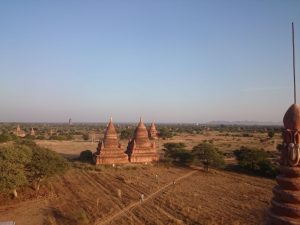 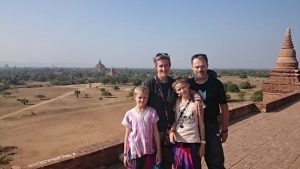 And since we were not there for sunset, there were hardly any other tourists. It was so amazing. I wish we had found this one on our first day, but I am also glad we found it at all.

Looking back Sulamani and this one are my favorite temples and Bagan is amazing, if it wasn’t for the sandy roads and me feeling not comfortable on the e-bike which proved to be a real problem today. We had a lot of sandy roads and a lot of obstructions on the road. At some point I just fell and the bike with me. Nothing serious happened but I got all dusty.

A few sand roads further and we were back in the guesthouse. Suzanne, someone we had met in the guesthouse, offered that we could use her shower, which we gladly accepted. So we washed off our sand, put back on our dirty clothes :-), Alina received some last minute Reiki from her for her feet and we were ready for the pick-up to the bus station, which brought our last official day in Myanmar to a closure. What a country!