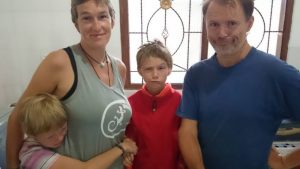 The Jodie O’Shea Orphanage is currently a home to 87 kids. At peak times they had up to 94 children. Everything from 2 days old to 19, when they finish high school. The orphanage is not a place for children who don’t have parents any more. No. It is a place for kids, whose parents can’t afford them.

Birth control is apparently expensive in Indonesia. So women have one child after the other and often there is not enough money, to feed all of them. There are even siblings in the orphanage. I met a little baby girl who was just left in hospital by its mum. Sometimes the parents get divorced and the mum can’t afford the kid, or the new partner doesn’t want it. This orphanage is one of the better ones. I heard about places, where the kids don’t get to go to school, they have to work from the age of 6 or seven. I heard about kids being mutilated, burned, hit… everything imaginable and then again, I can’t even imagine these things. They are so horrible, so very horrible.

Anyway, this orphanage is named after Jodie, a young Australian woman who tragically died as a result of the Bali bombing on October 12th 2002. Alison, the founder of the orphanage was volunteering after the bombing and met Jodie. They connected and as a result she founded the orphanage, first rescuing kids from other orphanages and later taking them from mainly Sumba, a very poor and arid island to the east of Bali, from Bali itself and other Indonesian islands. Alison is one of those women, who I admire very much. She is running about 64 kindergartens in Java, this orphanage and has her own manufacturing company. I am not sure how she is doing it but I find it amazing.

When we visited today, there were several volunteers on side. Only the nanny is permanently there and even lives on side. The volunteers work “normal” office hours and then go home. 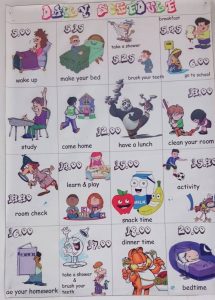 What I heard disturbed me at times. The kids have a very regular schedule, including homework, but they hardly ever do it. They have free English lessons, but don’t feel like taking them. They don’t like going to school. They have difficulties living by the rules, because back home there were just no rules. So they try a point system on a monthly basis. If kids do well, they get a smiley, if they do bad things they get negative points. The kids with the most smileys go on a trip to the beach or 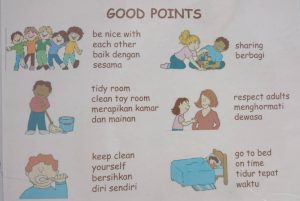 another excursion as a reward. The children with less smileys and a lot of negative points have to stay home.

At first I felt a bit useless. I have had some email contact with Radka, the volunteer coordinator, but she was busy showing visitors around, and everyone else was busy doing something. Eventually I found myself in the library, which was getting a make-over. All the books had to be sorted. And there were many books. The two women seemed a bit overwhelmed with the task and when I heard that they were sorting but had no tape to mark the books, I went out with someone from the office and bought some colorful tape which we then used to mark the book spines and the book shelves. That way it should be easy to keep an order in there even for the youngest kids. The red book just has to go back on the red shelve.

At some point Radka asked me to prepare for the SoulCollage® that I had offered to do with the kids. Improvisation was the task at hand. They had about 5-6 magazines, 1 scissor and 3-4 old cardboard boxes.  But amazingly the kids were happy and for about 2 hours a changing number of kids made cards.

We had lunch and afternoon snack there and the girls were playing with others for a while. Around 5 pm we left the place, deeply grateful for all the people working there, for all the volunteers and for all the donors. The whole place doesn’t get any money from the government, which means they depend fully on donations. So if any of you don’t know what to do with their money, here is a useful way of spending it: 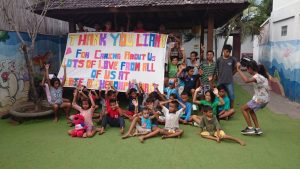