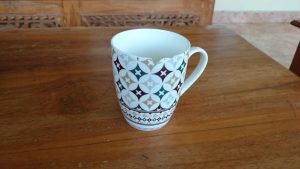 We had to leave our beautiful home in Lovina Beach, not before doing the dishes for the last time and you are not going to believe what happened… So first we broke two cups, then we replaced them with two new ones, of which I broke one again. 🙁

It was difficult to go. Sometimes, after a few days of staying in a nice place, it is hard to get back on the road. But this was the plan. 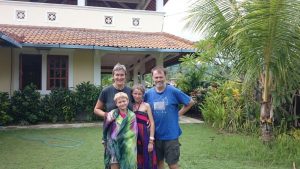 Our taxi arrived and we left.

We had planned on stopping on the way at the Gitgit waterfalls. Now that in itself shouldn’t be so difficult but already in the car we had to decide, if we wanted to go to the government owned place or to the villagers owned place. The government owned one was cheaper but apparently full of people. And as we try to be responsible tourists when we heard that the money for the villagers owned one goes to the village and their education system, guess which decision we took. 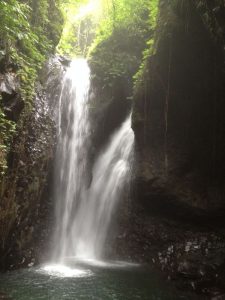 Arriving at the village owned Gitgit waterfalls, the first person we met was a guide, who… well, looking back, we didn’t need at all. He explained to us that we had to decide if we wanted to visit one or two waterfalls. Going to the ticket office and hearing about the price, made that decision easy: IDR 300 000 per person (22 Dollars) for two waterfalls!!!! NO THANK YOU!!!! So we just went to one waterfall – the twin one – and paid still a staggering IDR 600 000 (44 Dollars) for the four of us. Just to put it into perspective. We paid IDR 500 000 for our taxi driver, who worked nearly 6 hours going to Ubud and back. Anyway, we were told that the money was used to finance the local school… but we are not so sure. I read this on TripAdvisor later “The two waterfalls are lovely and you can swim there if you wish. Apparently one is cold water and the other is warm. It is a pleasant 200m walk down a reasonable pathway to the falls. As you arrive you will be met by a young man who will be your guide and the first thing he will say is that he is paid entirely separately from what you pay as yourentrance fee – this is untrue. It is a rip-off. You will be told that your entrance fee goes to education and the local village – I can’t say this is untrue, but I doubt it very much. First the amount charged depends on who you are – so some people get charged Rp 300k (per person) and others only Rp 200k (and that is only what I know of). The other thing is that you do get a receipt, but there is nothing on it that identifies it as anything. It’s a scam. I would expect to pay perhaps Rp 50k for the guide and probably tip as much for the informative chatty tour. But it is not worth more than that.” and I couldn’t agree more, especially after our little conversation we had with some other tourists on the way back. They only paid IDR 10 000 (0.70 Dollars) per person after initially being asked for IDR 20 000, which leads me to believe that my thoughts from yesterday, that I shouldn’t be so suspicious of being ripped off, are wrong after all. This makes things for me very difficult, because I am the only one in this family who is doing any bargaining. 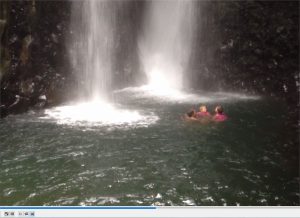 Stéphane keeps saying that he is no good at it and the kids… well, they have no feeling about how much things are worth it.

Anyway, putting all this aside, the twin waterfalls were lovely and the water was very cold. But we are Förster women and all three went in. Stéphane didn’t – chicken 🙂

After that little cooling experience we continued to Ubud. On the way we quickly stopped for lunch and I started feeling weird but didn’t think much of it. Later in the car, I kept thinking that I might have temperature, but since I never ever get temperature… it couldn’t be. When we finally arrived in Ubud in our guesthouse and I went to bed I checked and yes, I had already over 38°C. A second blanket was needed and Stéphane took the kids out for dinner, while I went to bed. When they came back, my temperature was still around 39°C, so I took a dafalgan and hoped for the best.