Only crazy people get up at 2 am to climb a flipping volcano. So I guess we are crazy. It had been Stéphane’s idea and wish and well, I just followed.

At 2 am the alarm run, we got dressed and went to the kids room to wake them up. Now, you couldn’t have two kids more different: Alina woke up pretty quickly, smiled, got out of bed, got dressed and was ready in no time. Lara on the other hand, was really hard to be woken up and then refused to get out of bed. She just didn’t want to and kept saying she was staying in the guesthouse. From that she went through crying into her toothbrush to telling us she had enough of the lot of us and wouldn’t forgive me for what I had done today. Well, luckily I had not planed on asking for forgiveness. But I do have to say, it was a very unpleasant start to the day.

Our driver was already waiting for us and took us to the place from where we needed to walk. The streets were  very bumpy and there were a lot of bends, so Alina didn’t feel too good but luckily didn’t throw up.

We arrived at our destination around 3:40 am, met our guide, got our torches and started to walk up Mt. Batur.

The Gunung Batur area is like a giant bowl, with its bottom half covered by water and a set of volcanic cones jutting out of the middle. Sound a bit spectacular? It is. On clear days – vital to appreciating the spectacle – the turquoise waters wrap around the newer volcanoes, which have old lava flows oozing down their sides.

In 2012 Unesco honoured the area by adding it to a list of more than 90 geologic wonders worldwide and naming it the Batur Caldera Geopark. (Lonely Planet) 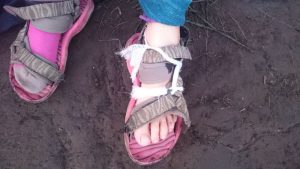 Well, at that time of night one doesn’t see anything but the stars and the next step. It was a hard walk up and on top of everything Alina’s walking sandals, that were supposed to last 12 months finally gave up this morning. Our guide in his unlimited wisdom DIY-ed a solution for her. 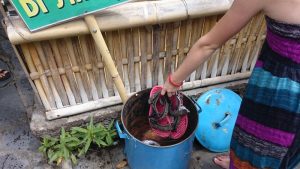 And these shoes took her all the way up and all the way down again, when we finally threw them away.

It was a hard way up not because we had to walk up but because of the material we had to walk on. First it was normal soil but soon later we were climbing over lava rocks and 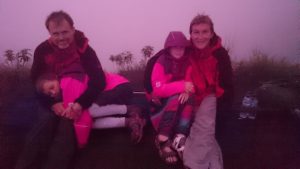 lava gravel. It was really difficult and slippery.

At 5:50 am we were finally on the top. And when the sun was about to come out, the clouds came in and we saw nothing. But somebody turned a switch and suddenly the clouds moved out of the way and people 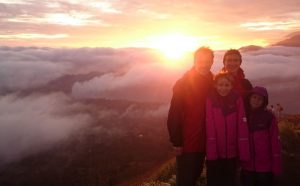 were cheering and clapping because of what they experienced. And it was beautiful. It was amazing. It was stunning. We had some hot drink and our breakfast (boiled egg, egg sandwich, banana sandwich, banana and some deep fried bananas) on the top of the volcano. When the clouds allowed it we could see a bit down into it, not much, but a bit. The guides were actually cooking breakfast in a natural kitchen. Just around the corner from where we were sitting, the stones were nicely hot and the air was warm. The eggs just needed to be placed in a hole and voila – cooked. Mt. Batur is not dead dead. In 1963 there was a lava eruption and in 2000 some smoke was seen. 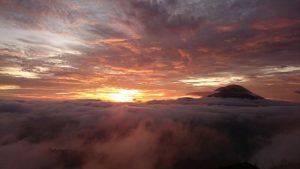 After a while it was getting cold and we made our way down again. For me down is always more difficult than up. Up is just the will to make it, down is scary and I had to be so careful each step of the way. The lava path was slippery as hell. But we made it in one piece, got back into our car and were driven to Batur Natural Hot Spring to pamper our poor bodies. 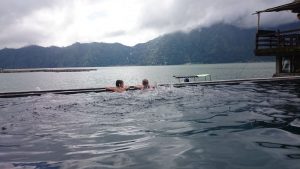 Then a stop to have some lunch and finally a coffee Plantage.

We had already seen some coffee and cacao plants before so it was much more interesting to taste the different coffees, teas and the one hot chocolate. What annoyed me a bit was that we had one tray between the four of us. I didn’t think that was customer friendly. What do people like us do when one is having his coffee with sugar and the other one without? Well, that didn’t seem to be their problem, so we tried, were sometimes surprised and sometimes disappointed. We didn’t try the Luwak coffee for which Bali is so famous. Never heard of Luwak coffee? Have a read. It is the most expensive coffee in the world. I somehow didn’t fancy drinking a coffee that came out of a palm civet (luwak’s) a… sorry guys.