You don’t really want to know about my day, trust me.

There were two hours in the immigration office in Denpasar with

All that two leave the immigration office with a piece of paper telling us we have to come back on the 17th February to pay and to have our photos taken. Photos that I actually have but they don’t accept. And then we will have to come back a third time to pick up our passports with the new visa – hopefully. I HAD IT. 🙁 We have been to three countries in Asia, we have crossed the land border Laos – Cambodia with all its horror stories and after all of that, it had to be Bali, which is the nightmare one. And we were lucky I think, I had timed it so that we would be there even before their opening hours, we had ticket A0001, so we were the first one in the queue. Getting the photocopy of our flights which we only had as an e-ticket on the phone was the best. They don’t just want to see the proof, they want to have a paper copy. So Stéphane had to go to a copy shop who took him to an internet café, from where he could send a pdf to the copy shop where it got printed. Nightmare. When I had filled out all the forms, they gave me red folder, which I again had to label for each one of us.

Anyway, after two hours we were out! 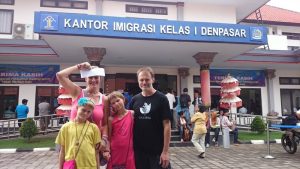 Next stop Eiger Adventure shop in Denpasar to replace Alina’s broken trekking sandals. This is an outdoor specialist shop. I had even contacted them beforehand via facebook and was told, they have kids sandals. Yes, so far it was true. What they hadn’t told me was that they have size 35 and that’s it . So either your kid needs to grow into the shoes or you just cut off part of the foot. I asked them if they could check if they had another sizes in one of their other branches and imagine, they had a 37 somewhere else. Hurray!!!!  But they can’t send it to the branch in Denpasar. They don’t do that.

By that time I just couldn’t take anymore. Customer service is just an unknown concept. And every time I am looking into a smiling face, even if they just say “no” to everything. So no shoes.

Next, my phones battery is broken and needs replacing. Sony service center. I found an IDR 100 piece on the street on the way there, so I was being hopeful that one problem could be sorted. And believe it or not, there was a technician, he could do it, it would cost me an arm and a leg – but, it would get done. So I left my phone there and we continued our odyssey.

Samsung service center to get an additional external hard drive because the computer is having some serious problems. But the center had only phones. So by that time, we split. Stéphane hitched a ride to the next stop the telecommunication office and the girls and I went into Starbucks waiting for him. We have been buying sim cards in each country and had our phones working without a problem. Now in Bali, everything is different. Stéphanes call credit had run out for the second time and we don’t know why. Did somebody hack into his phone? Those questions he wanted to have answered in the office, which took him a while to find because it was not where it was supposed to be.

Finally he came back not only with an answer to his questions but also a new external hard drive. The package for the phone that we had bought allowed us to surf only in Denpansar. Outside of Denpansar it was using the call credit. OK, one problem less.

Back to the Eiger shop to get the exact address of the other branch, because we had seen two different shops on the map. Oh, and did I mention that it was raining the whole time? So by the time we had gone to the Samsung shop we had been soaked the first time, to Starbucks the second time, to the Eiger shop the third time. So when we decided to get a go jek to the other Eiger branch in the rain, it was routine already. 30 minutes later we were on the other side of Bali in Kuta, soaked and cold.

In the same shopping mall Stéphane found his long looked for flap for his iphone and was very very happy.

By that time it was nearly 6 pm and still raining. The grap taxi were expensive because people obviously prefer to sit in a dry car instead of on a wet motorbike. Since we had already the experience we just decided to get wet one more time today and called a go jek motorbike. Now, I have been on several bikes before but today I was scared. It was not a slow lovely scooter, no we had a proper Honda bike. And it was raining really heavily. He was driving very carefully, but between being worried of falling off the bike and having an accident because of the rain – I was trying only to relax and trust. We arrived safe and sound I might add.

Had some dinner. End of day! I told you, you don’t really want to hear about today