After our first visit to the immigration office in Denpasar we had to return today to pay for the whole thing and have our photos and fingerprints taken. We arrived just after 8 am and 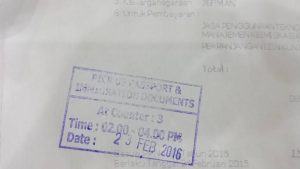 were out by 9 am. And I am glad to inform the world, that we will have to return in a weeks time to actually pick up our passports. There is something seriously wrong in this country. Either it is a way of employing as many people as possible, or it is a way of putting us foreigners in our place… or it is a way of punishing us for bad karma. If I had only known all this before, we would have never come to Bali. I would have travelled to Thailand or Vietnam and given Bali a miss all together. It is beautiful here, but it is not worth the hassle. 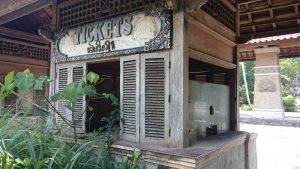 So what to do after such a beginning of the day. There were several options and as we are four in our family there were four wishes and I was getting seriously frustrated. In the end we opted for an old abandoned fun park I had heard about – the Taman Festival Park. 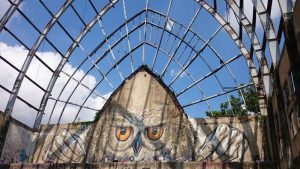 Opened in 1997 and closed in 2000 this is a weird place. We saw some amazing graffiti like this one. And it was spooky. If you are a fan of ghost cities this is definitely a must – but in full body mosquito armor and with a strong torch. Already when we entered Lara was eaten alive. Hence her face on this photo. 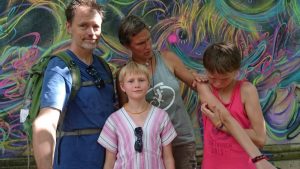 So we needed to give her skin some time to recover and what better thing to do than to jump into salty water. But we didn’t have our swimming suits with us. So underwear had to do… so guys no photos for your eyes, sorry 🙂 but a panoramic view of the place.

After that refreshing break we went back in. The park is huge and I am sure we only saw a fraction of it. We also didn’t dare to go inside of the buildings, you just never know what animal you might meet or if the building is not collapsing on you. There was for example a movie theater. It was spooky. We saw the movie theater itself but didn’t dare to go inside. It was too dark and we just had no idea what to expect.

Back in the days there was also a zoo inside. Crocodiles and other animals. Apparently they all found a new home in some zoo but you just never know for sure. We are in Indonesia after all. 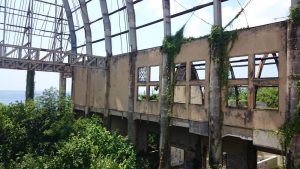 I would have loved to spend more time there, to go more around, but nature is really taking the place back and the mosquitos are the bosses. There were so many around that there were times when I saw 3-4 on Alina’s back at the same time. She was begging us to leave the place.

So we left and took go jek to get us to a lovely beach coffee place in Sanur, where Stéphane was working yesterday – the Luhtu’s coffee place. There we had lunch and cake and coffee and some good wifi. 🙂

Returning home we first had a shower to remove all the black sand from the beach before relaxing in our home.