Another last day in a place and we kept thinking what we wanted to do. And in the end the answer was quite easy: going for a swim, some good food, an ice cream…

Stéphane stayed home because his Dell technician was actually on his way to fix his computer. But the girls and I went to the beach and had a great time just playing. There is not much swimming in Sanur, the water is very shallow for a long time and then there are all those algae’s and it is the most uncomfortable feeling when those plants stroke your belly while swimming. So we just stayed closed to the beach and let time go by. 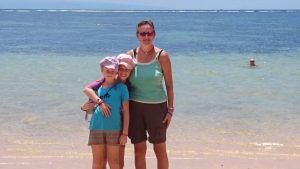 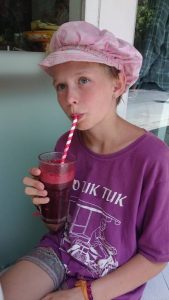 Then around lunch time we left and went to a place Alina and I had seen on our very first walk after she had her first acupuncture treatment with Ken. It is a small warung (restaurant), where the food is already prepared and one sees all the dishes and can choose what to eat. It tasted absolutely amazing I have to say. One of the best if not the best place we ate at so far. And Lara’s berry juice was from a different planet. I even had a chunk of raspberry in my mouth when I tried it.

With some cake as take away we walked towards Manik Organik where Alina had her final treatment at 1 pm. And to cut it short: more needles, keep on the Chinese medication and wait. But I had a revelation. One of the drugs is to strengthen the heart connection, to feel connected with others – and I kept thinking that Alina is pretty good connected within the family. She is the one that is grounded. She loves deeply and she shows her love clearly. So I kept wondering, why did Ken make a connection between her skin problem and her heart connection? And suddenly it dawned on me. Alina had an incident in school months ago, that she keeps remembering and just recently we even talked about changing that visual memory photo that she is recalling. I used all my NLP but we didn’t manage to shrink the image, to distort it, to change it in any way. She was really holding on to this memory. Months ago, in her class back in Switzerland, she experienced something horrible. She was friends with a boy. Two other kids kind from her class joined their group and they played together, created a detective club together – just had fun together. One day, Alina found herself in the most heartbreaking situation. The other girl in that group asked the other two boys if they also didn’t want Alina any longer in the group. Just imagine how that must have felt. They voted and all three raised their hands. That picture is really burned into Alina’s memory and just recently upset her again so much. Anyway… this made really sense and I had even found a quote on fb on the topic of forgiveness and given it to Alina. Ken asked for the girls name and she said it with so much power. And then he asked her to shout loudly with as much force that she was forgiving her for what she had done. And that Alina couldn’t do at all. We had our homework. Later we went back to the beach and Alina and I walked into the ocean. In some distance where nobody could hear her I asked her to say: “xxx I forgive you.” The first time it was more a whisper, the second time it was louder and than finally – she shouted it out into the ocean. Her whole little body language changed. She laughed. She giggled. I guess we will repeat it, but it was a big step for her. In the evening we continued with yet another of Ken’s suggestion. Alina was drawing her memory and then drew a second image with only the good things from that picture. So on the first image there are the four kids in the environment. On the second one only the environment. With a headache Alina went to bed. I guess things are moving.

For myself I told Ken about my panic attack a couple of nights ago and he suggested not to give me another TRE but a calming acupuncture treatment. I will have more TRE, but I would like to have a safety net of support when I do. Either I have to do it in Switzerland or I do it in Australia. He told me that the treatment is very strong and people often break down afterwards with all the emotions coming out. Here in Bali, I have no medical support, no one to turn to. In Australia I think it will be better. Anyway, Ken is part of my healing process. He introduced me to the missing link. I was always looking for a body treatment. Now I have found it.

We finished the day going back to the beach, played some more before going home. Dark rain clouds had appeared on the sky and while I walked home it started to rain. I stepped on our terrace when it started pouring. The kids got soaked because they had stopped at the ice cream place on the way home and obviously where three minutes behind me. 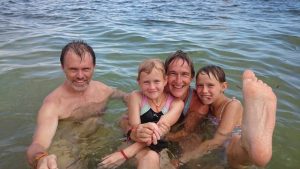 So this was Sanur for us. A quiet place with a nice beach, some great food, a spooky abandoned fun park, Ken a new therapist and a lot of sunshine. Tomorrow we are going back to Ubud.