One thing we hadn’t done was to take a cooking class. Lara, a German young woman we had met in Ubud had recommended the 9 Angels.

So, the girls and I left our guesthouse just around 8:45 am in a bit of a rush. And from 9 am until … 7 pm we were at Thony’s 9 Angels. Thony became a chef about two years ago at his first restaurant 9 Warung just south of Ubud. And I guess his success made it possible to just recently open his second restaurant right in the center of Ubud. The concept is pretty simple: There are cooking classes every morning from 9-12 o’clock. The dishes are then the buffet for the restaurant. Guests are coming, choosing their food from the buffet and are paying what they can afford into a trust cashier. There is no menu, there are no prices, nobody is serving the food and the drinks, and you have to do your own dishes. And all that in the most amazing setting.

We spent the entire morning cooking several dishes. All brightly colored and fantastically tasty. If you want to learn about Indonesian cooking, this is the place to come to.

At 12 we left the kitchen and had lunch with all the other guests. Stéphane had been working in the morning and joined us for lunch. Afterwards he went back to the guesthouse, took his laptop and came back. 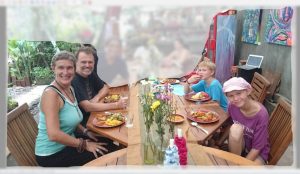 Thony is an amazing visionary. Before being a chef he taught stress management in companies and believe it or not, his kitchen is the most relaxing place you can imagine. There is non of the Western restaurant kitchen harsh tone of voice, there is no shouting, there is no running around. He kept telling the girls to move slowly and to do things gently. We got to choose what we wanted to put into the dishes, we got to say how much of the spices he put in, we went to his garden to get some green stuff, we could make our own juices when we were thirsty or drink a cup of coffee.

In the afternoon there was even some music and when the kids didn’t feel like being in the kitchen, Alina did some painting and Lara was writing a story about 9 angels. And then there was the chocolate baking session. Anna, another guest came in and prepared a chocolate cake together with Alina, which had to be in the fridge for two

hours. This must have been the longest 2 hours ever. When the cake finally came out of the fridge it reminded me of a cake that I know as “Kalte Oma“.

At some point Thony told us about a coffee place just a few minutes away from the restaurant and let us borrow his motorbike. So Stéphane and I went quickly there and found an amazing place. They are roasting their own coffee every morning and then use it during the day. So tomorrow morning guess where I will be…