What a day! I loved it. The beginning was a bit stressful. We just couldn’t find a go jek to drive us to the Bamboo factory where we had booked ourselves into a tour. But finally, last minute so to say, we found one and Stéphane drove the two girls with the rented bike and I took the go jek.

In the bamboo factory they prepare the bamboo for usage and they built furniture. No photos were allowed. But just to give you an idea: bamboo grows about 30 cm per day. The bamboo gets “harvested“, then dried, then treated, washed, dried again and is then ready to be used either in construction of the house or in furniture making. The process itself is not really complicated and they claim they are using every bit of the bamboo.

At the end of the tour we moved to the Green Village.

Green village was actually intended for the parents of the kids who went to the Green school. But actually now, out of the 12 houses only one is lived in by the owner, although he also rents out the second half of his house. The Green Village is not a community, it is basically a hotel village for people with quite a bit of money in their pockets. All the projects are done by the Ibuku team. They design the houses, they make the models and their craftsman are building them. Ibuku is run by Elora Hardy, John’s daughter. He is the founder of the Green School. Elora became really known in the world through her TED Talk. This is how I had found about about the Green Village. And for Stéphane being a civil engineer, coming here was obviously a dream. We looked at two houses, the Garden House, which was Elora Hardy’s house, and the Sunrise House. Both places are stunning. Judge for yourself – link. It would be a dream to come here with the whole family, or a group of friends. There is so much space in the house, so kids could be running around all day playing and grown ups could be sitting all day talking, cooking, reading. Dream on Anja, dream on.

Our short video of the tour. 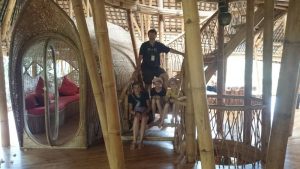 Then in the afternoon the girls and I went to our paradise – the Big Tree Farms. A chocolate factory also made of bamboo. There we learnt not only about chocolate making but also about the different cacao plants.

There are basically four different cacao beans: Criollo, Forastero, Trinitario and Nacional. They do taste different. And we learned that some chocolate makers prefer the beans to be fermented some don’t. The Big Tree Farms ask their farmers to ferment the beans. That basically means they take the fresh beans cover them with banana leafs and leave them for a couple of days. Then they dry them. The next steps are done in the factory and are pretty straight forward.

We saw a bit of the manufacturing process but not much, they were waiting for beans from the farmers. But we tasted a lot of chocolate.

Our short video of the tour.

After the tour we just stayed in the shop and waited for Stéphane who had gone to Denpasar to pick up our visa extension. Now we are finally officially allowed to stay 30 more days.

Going home was also fun. We called for a go jek and waited for a very long time. No driver was available. The shop closed and we needed to leave. Finally we decided Stéphane would drive the girls back to the 9 Angels restaurant and then come back and pick me up. Off they went. And I started walking. It would have been only 2 1/2 hours. 🙂 But I had not even walked for 5 minutes when I finally found a go jek driver who came to pick me up. I quickly informed Stéphane that he didn’t have to come. When I arrived at the 9 angels, I needed some small change for the driver. I called Stéphane, but he didn’t pick up the phone. So I went inside of the restaurant, found my daughters but not Stéphane. He had left already to pick me up WITHOUT checking his messages. Typically.

A day filled with wonder, beauty and chocolate – and some bad news.

When we arrived in the guesthouse and I started to work on the blog, I read my email. Stéphanes Maestro card had been used the previous evening in Denpasar with two attempts of a wrong password. So the bank cancelled his card, which was good, as we were not in Denpasar the previous evening. But his card was not stolen. So someone must have copied it, God knows how. Now we only have my card. 🙂