Amed – or somewhere in that direction.

For those who read the blog from yesterday, our adventure into making the apartment ok continued. But let just say… we finally have a working wifi, we have hot shower and the rest we just life with.

In the morning we took the motorbikes to go to the Cest Bon 1, the other guesthouse of our owner, to have a look and to consider to move there. There we met a really nice guy who worked there. With him we had a chat, he recommended a beach warung, the place of his friend and said there we could also get our laundry done. Now guys… when I said Bali is expensive, then this area is even worse. Usually we paid IDR 7000/kg. Now here in all the places they quoted IDR 20 000. Bloody hell, that is nearly three times the price we had so far, for those who aren’t good at math 🙂 With a piece of paper with something written in Balinese we drove to that warung and talked to the owner. First quote for the laundry IDR 15 000 because we were friends of his friend. I was just about to leave when she offered IDR 10 000. We said yes. Then I wanted to have it weight. But first she didn’t have a balance. I realize I am sounding totally paranoid, but guys that is what happen when you spend more than the usual two weeks here. Anyway she found a balance and said 10 kg, only to correct it later, because she had read pounds not kg of the scale. So anyway now we will get our 5 kg done for IDR 10 000.

When that was finally off my back and we could sit down, relax and have a juice. Then we continued along the coastline. The street along there is nice. You have a fantastic view over several beaches and there are several villages just next to each other. The whole place reminds me a bit of Scotland.

Self cooked lunch at home.

In the afternoon we just slouched, watched the end of the second Harry Potter movie, went to our local beach and jumped into the water. On the way back to the guesthouse we wanted to get ourselves a 19l water bottle to refill our small bottles. I had asked a guy just outside the shop, he told me it would cost IDR 20 000. When Stéphane came with the water and told me he had paid IDR 30 000, I got really annoyed. Why is it that really everywhere we go we have to be careful not to be cheated? Angry as I was I went back to the shop to confront the shop assistant. Something people just don’t do here in Bali. Conflicts are not really openly dealt with, but I didn’t care anymore. I felt betrayed. So after checking and double checking and insisting, they told me that it costs IDR 20 000 and the young guy must have made a mistake. Ya right, and I am an idiot… but I got my IDR 10000 and left.

For dinner we went to a lovely place: Life in Amed. I had seen it on tripadvisor for the yoga. The restaurant was lovely. In a beautiful setting, we were served not only lovely looking food but also fresh and delicious one. I had for the first time in ages a salad and look at Stéphane’s beautiful plate. 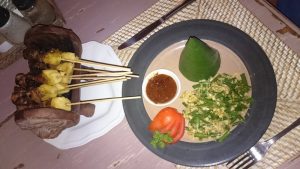 This is a place not for every day eating, for that it is not really in our price range, but for the special occasion – why not. 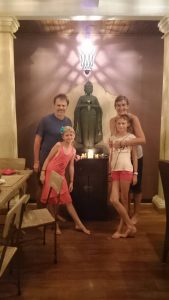 On a more personal note I have to say that currently I am having nearly every night a flash of a panic attack. Some last longer. Some are quicker over. But there is something going on. And of course it had to happen last night in the restaurant as well. Driving home with the motorbike afterwards was not the best experience ever. But everybody know in my family, I drove very very slowly and we arrived without a problem safe and sound at home. I am not really sure what is going on inside of me. Strange thoughts are popping into my head. But I try to see it for what it is: just a thought that I am giving a negative meaning. If I remove the bad meaning, if I remove the interpretation of what it could mean – then not much is left. But it is not easy.