Wow, a day filled with surprises, discoveries, beauty and music out of this world.

Our day began very early. I got myself out of bed at 05:30 to do my morning meditation. Than waking up kids. Preparing breakfast. Getting the travel bag prepared. Quickly a family portrait taken. And then we left for Inverness to bring Satya to her bus. She was leaving us this morning and she will be missed. Alina took it especially bad. But both girls will spend a w’end ALONE with her in Glasgow before we leave Scotland. So they will have a blast. Anyway, funny story at the bus station. Her bus was supposed to leave at 08:15 am. And when we neither saw it around 08:05 am nor at 08:10 am a sense of slight nervousness appeared. I had seen a bus to Birmingham and wondered if it might go via Glasgow but Satya didn’t think so. Well, when a bus driver desperately looked for his last registered passenger he also asked Satya. And it turned out – the Birmingham bus went via Glasgow. This will give a nice anecdote for years to come.

Once Satya had left, we three girls started going around Inverness. And the first thing we discovered was that it was cold. So we found ourselves a café and had something warm to drink. In the café I had actually the idea not to run around Inverness like every other tourist but to actually ask local looking people, what their favorite place in Inverness was. I thought that way, we would discover sights that where in no travel guide. Not that we had one. So I asked in the café and got some directions that left us lost after the second corner. Well faith took us then into a Lush shop. You know these fabulous smelly and colory soap shops. I always loved them and I wanted to let the girls have a sniff around. And it was a brilliant idea. We not only indulged in scentes and colors, I also found myself in a fascinating conversation with one of the shop assistant. In the shop they have a wheel with different color samples. The wheel gets turned while I am having my eyes closed. When the wheel stops I can open my eyes and I pick the first three colors that catch my eyes. 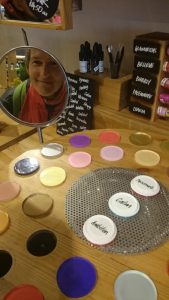 The first color gives a strength of mine: Ambition – yes, very true. The second color is about what I might need at that moment: Calm – well, could be. And the third color suggests something in my character that I could develop: Passionate. First it surprised me but she gave me some examples and who knows… Anyway the girls did it too. We had a good time in there. She told me about amazing Lush Spa’s around the world with very different approaches to massage and body work. So if any of you guys have a chance to go to one of those spa’s – she highly recommended them. And I also asked her about her favorite place in Inverness.

Now her recommendation filled basically our day. We went for a beautiful walk along the river Ness. That path lead us directly to St. Andrews cathedral and when entering I saw a concert poster for that evening. The Swiss Gospel Choir. I had not heard about them. But my gut feeling told me that it would be a great idea. And it was a great idea. The choir was touring Scotland and Inverness was their third stop. A really amazing group. So much energy. So many ‘never heard before’ songs. Some very surprising song choices like ‘Happy’ from Pharrell Williams and ‘Man in the mirror’ from Michael Jackson. So many exceptional good solo voices in the choir. If you have a chance of going and seeing them. It’s forth it.

Our walk lead us suddenly to the place we had been to on our second day in Forres. The swimming pool. That was funny. The shop assistant had mentioned the Botanical Gardens and we had seen them already on that day. But when we had come out from the pool everything had been closed already. So this time we had time to have lunch there and go around the Gardens. They are beautiful. Not too big. Not to small. Some tropical plants. Some cacti. And a very large outside garden surface. There is even a project going one with people with learning disabilities. Amazing.

Afterwards we needed to go back to our car, because the parking money had run out. So we just went quickly back to Inverness bus station, picked up our car and drove out again this time to the Whin Park. There we went on the Ness Islands Railway and tried to move our boat across a very small lake. The girls had two playgrounds to choose from. So everybody was happy.

Inverness is quite an expensive place. If you need to feed three people, the train ride, which took less than 5 minutes but was £2 each and the boat hire was £6 for 30 minutes, then things get very quickly very expensive. So tomorrow is back to routine, cheap sandwiches and work at Cullerne.