Amed – or somewhere in that direction.

Again, not much to say about the day. Stéphane went back to the office and the girls and I to the beach for some more snorkeling, only this time with t-shirt and leggings. Our sunburn from the day before is legendary. 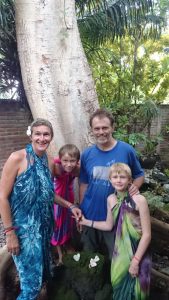 Just before lunch dark grey rain clouds appeared on the sky and the locals started preparing for the rain. So we made also a move and picked up Stéphane on the way and went to a very nice special garden restaurant – the Aiona garden of health. There a Swiss lady (apparently from St. Gallen) is having a guesthouse, restaurant, yoga – meditation place, a walking meditation labyrinth, is selling Ayurveda teas and remedies and is giving Ayurveda consultancies. We only had lunch.

A great one. With six different flavors as suggested in the Ayurveda tradition. She also cut one more Aloe Vera leaf for our bums and I found a replacement for our white pomander and for the Sangre de Drago. Here in Indonesia they have the neem tree, a sacred tree, with absolutely 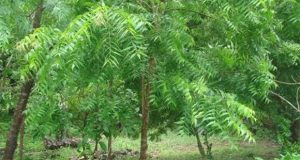 amazing health benefits.  I got the oil and a balm. The oil is anti-fungal, anti-bacterial and anti-virus, so a perfect way to disinfect things. The balm has mainly healing properties. Unfortunately there is currently a neem tree dying happening in Indonesia. People don’t seem to know why but one thought is that if we treat the nature with disrespect – the nature refuses to help us.

Anyway afterwards we just went back to the guesthouse and relaxed for a while, before I took the motorbike to go again to the Life in Amed Hotel, where they have a daily yoga class. 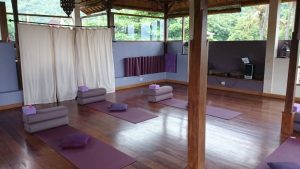 I was 30 minutes early, I had just misread the time. But on the upside, I had time to talk to the yoga instructor, an American lady, who gave her last yoga lesson that night before leaving for India on Wednesday. And since no one else joined this drop in class, I had a private lesson in yin yang yoga, and I loved it. Holding postures. Deep stretches. Great. She corrected. I learned. Afterwards we drank a ginger tea together and talked. SoulCollage® came up. We talked about yoga – Kundalini yoga and SoulCollage® and how these two benefit each other. Time flew and the rain stopped.

I needed to take that chance to drive back home. It was scary, dark, wet. I had to go through huge paddles. The chocolate cake for Alina was protected under the rain flap. But I made it home in one piece and so did the cake.