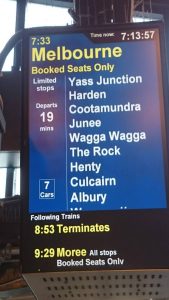 We took the train from Sydney to Melbourne which took from 07:33 am until 6:30 pm. But the trip was comfortable apart from the little running in I had with a woman working on the train.

Lara was sitting in the chair in the row before me. She was kneeling on her chair and was asking me a question, when this lady came and asked her in a very harsh voice what a chair is for… now Lara was completely paralyzed not really realizing what was going on. I just told her to sit down and the woman left. On her way back through our carriage I just caught her and confronted her. Of course the supervisor just turned up by chance and she involved him, making her point that Lara had done something dangerous. I didn’t question what she did, I questioned how she did it. Even talking to me she was rude and very bossy. And at some point she said that she knows she can come across as bossy and that she is working on it. It all sounded very rehearsed and I didn’t buy her apology but I was proud of myself, that I didn’t let it go. I stood up for my daughter.

The rest of the trip was easy. When we had arrived at Melbourne we took the bus to our location: Warryndate. This is were we will spend the next week and it is again wwoof-ing.

Our host family picked us up from the bus stop and oh God… it is so cold here. The night before I had been wearing a summer dress in Sydney and I hadn’t been cold. We didn’t talk long, the girls were tired and so were we. We are sleeping in an old camper. The girls will be playing mainly with the girls of the family and Stéphane and I will be helping in the garden.