I had promised to make pancakes for breakfast. Their girls went back to school after the holidays and had to leave at 8:30 am. So everything needed to be on time. You know that feeling when something doesn’t work which has worked a 100 times before. Well, I had that on Monday morning. Our of the three four frying pans that I had tried, in two the pancakes were sticking and it was a mess. In the end I used two pans, and only after 45 minutes of trying and trying I finally produced some reasonably looking pancakes. The ones before were ugly to look at but ok to eat. 🙂

Then their girls needed to leave for school and I saw exactly the same stress we have every morning at home. Something gets forgotten. Other things can’t be found and time flies. And then suddenly you are running late. Same thing. Just different continent.

When the girls had finally left, the parents also made their way out and we were left with a kitchen that showed all the evidence of my pancake disaster. We spent nearly two hours cleaning everything and finally didn’t have time to walk into Warrandyte as planned. Our host was back and gave us a lift into Warrandyte where we had a coffee together before she needed to go. Our girls played a short moment on the playground before we got ourselves a pie for lunch and then took the bus into Melbourne where we needed to pick up our camper.

Wicked Camper is a rental company of a different kind. The Campers have quite strange graffittis on them and inside everything is written on. We were lucky in a way of not getting a camper with a very rude or offensive design. Anyway we picked it up and yes, did I mentioned: automatic gear box, right side steering wheel, left side of the road driving and I can’t see the front left corner of the camper. So driving is fun – nearly. 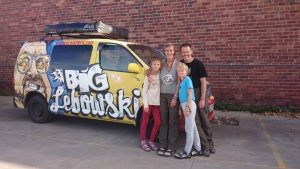 With our camper we went to Martin’s work. He had taken all our bags and all the spare blankets and duvets in the morning to his work and now we went to pick them up. 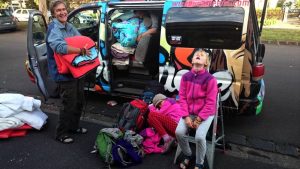 We were advised not to leave the city before 18:30 because of the traffic, so we went shopping first and then left Melbourne. Our campsite we wanted to go to we hadn’t booked so Stéphane called just before we left and was told that they close at 8 pm. Our GPS told us that our expected arrival time was 8:02 pm so the thriller and the drive against time started. When we left the highway Stéphane tried to call again hoping the guy could just wait for us. But nobody answered the phone. So you can imagine how glad we were when we arrived and he was still there.

We found our spot, it was dark and it started to rain and suddenly I knew again, why I don’t like camping 🙂

Quick dinner, no shower not even brushing teeth and off we went to bed.