About 40 chiefs signed the Treaty of Waitangi on 6 February 1840. By the end of the year, about 500 other Māori, including 13 women, had put their names or moko to the document; all but 39 signed the Māori text.

Following the meeting at Waitangi, the Treaty circulated around the country for Māori to sign. Between February and September 1840, missionaries, traders and officials explained its terms at 50 or so signing meetings from the far north of the North Island to Ruapuke Island in Foveaux Strait.

More information on the Treaty – here

The youth hostel in Auckland, where we were staying for the past nights, closed this morning for the next 5 months to have some serious refurbishments done. Everybody had to be out by 10 am.

So Stéphane left to pick up our rental car and I was left do get the packing done. By 9:55 am everything was out.

By 10:15 am we were out of Auckland and drove direction north. We were heading towards Bay of Islands.

The Bay of Islands ranks as one of NZ’s top tourist drawcards, and the turquoise waters of the bay are punctuated by around 150 undeveloped islands. In particular, Paihia has excellent budget accommodation, and boat trips and water sports are very popular.

The Bay of Islands is also a place of enormous historical significance. Māori knew it as Pewhairangi and settled here early in their migrations. As the site of NZ’s first permanent British settlement (at Russell), it is the birthplace of European colonisation in the country. It was here that the Treaty of Waitangi was drawn up and first signed in 1840; the treaty remains the linchpin of race relations in NZ today. (lonely planet)

On our way we saw some glimpses of what NZ countryside might all be about: saturated green fields and hills, some ocean on the horizon and the most beautiful sunset.

For lunch we just stopped in a small village along the way and had a bit of a pick nick rudely interrupted by two gooses who seemed to be very hungry. They came and we fled, they followed us and we fled again. There was the situation of one of them jumping on the bench where I was working on the computer. I got so scared that I literally jumped into the air. 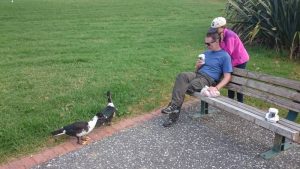 The girls are now traumatized and seriously scared of gooses 🙂 And when we wanted to take the family photo, the gooses came back and really went for us, not biting us but in the end it took another person to take the photo, because I couldn’t leave the phone on the table to get a selfie done. 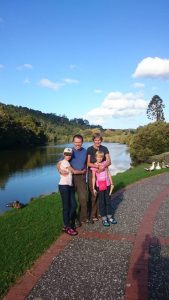