That the only terrorist attack on NZ ground was committed by France? The bombing of the Greenpeace boat Rainbow Warrior in 1985 in Auckland harbour is still very present in the minds of the Kiwis. Being blackmailed in terms of where the two agents were trialed a no win situation for them and the early release of both convicted secret servise agents a blow in their faces made worse by them being decorated and promoted upon their return home. More information here

There had been some discussion on what to do today: kayaking, Treaty Grounds, or nothing… Stéphane needed to work and my blog took much longer than expected. I hope you guys enjoy the videos, they are a lot of work 🙂

So finally it was after 11 o’clock and my headache didn’t want me to go on the water. So I decided, without further liberation with the rest of the family, that the girls and I would go to the Treaty Grounds and Stéphane could work.

Occupying a headland draped in lawns and bush, this is NZ’s most significant historic site. Here, on 6 February 1840, the first 43 Māori chiefs, after much discussion, signed the Treaty of Waitangi with the British Crown; eventually, over 500 chiefs would sign it.

The importance of the treaty is well understood by a NZ audience, but visitors might find it surprising that there’s not more information displayed here about the role it has played in the nation’s history: the long litany of breaches by the Crown, the wars and land confiscations that followed, and the protest movement that led to the current process of redress for historic injustices.

The Treaty House was built in 1832 as the four-room home of British resident James Busby. It’s now preserved as a memorial and museum containing displays, including a copy of the treaty. Just across the lawn, the magnificently detailed whare runanga (meeting house) was completed in 1940 to mark the centenary of the treaty. The fine carvings represent the major Māori tribes. Near the cove is the 35m waka taua (war canoe), also built for the centenary. A photographic exhibit details how it was fashioned from gigantic kauri logs. (lonely planet)

One can spend easily a whole day on the Treaty Grounds and the girls run around doing a questionnaire hoping to get a price at the end. I am not a big fan of museums but this one is really good, unfortunately very cold (later we were told that the low temperature is to preserve the artifacts) so we didn’t stay long. The guided tour was done by a guy whose grand-grand-grandfather had signed the treaty. He was really good guide not only showing us things but doing it in a very theater like way.

After the guided tour we had a short cultural performance with some Maori dancing and singing. 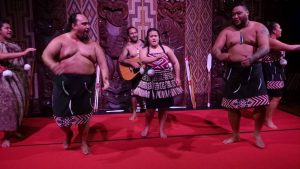 The meeting house in which we were for the performance is beautifully done and has strong rules: no food, no drink, no shoes. And before going in we had a welcome ceremony during which we were not allowed so smile. 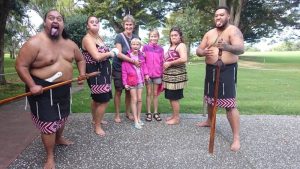 Time flew and it was time to leave and drive back to the youth hostel.

A day filled with history, learning, indigenous culture and a feeling of yet again mistreating indigenous people. The Maori are still trying to get some land back, which has been taken unlawfully from them. But here in contrast to Australia, I am having the feeling of the Maori culture being more accessible, more out there in the open.