Today was Wednesday. The day were there is only work in the morning at Cullerne. In the afternoon the garden team is tuning in.

But I woke up to an email from someone I have been working with asking me to ‘take’ her brother, who is in hospital recovering from a serious surgery with me to Cullerne. So I did. I brought him in my thoughts to the circle and I took a couple of photos of the garden for him. I felt very grateful for being asked and for being able to do that for another human being. During the past seven years there have been always people who prayed for me, who checked how I was doing, who sent me little reminders that they were there  for me. But I could hardly ever do anything for them. Now, suddenly I find myself in a couple of situations where I can return that compassion and that feels good.

So Cullerne: Yesterday I had felt lonely during the ‘Love in Action’. Now today I had the complete opposite. We worked as a team. We discussed things. We found really good solutions. And we helped each other. What am I learning from that? I am not the solitude kind of person. I love being part of a team. I haven’t really been part of a team in over ten years. Being self-employed is a lonely job. I feel encourage to look more for projects where I can work with other people on a common goal: a workshop, a book, a retreat,…. whatever. This will be my goal after I come back or if there are opportunities already before.

Our Forrest Garden is taken shape and it is so rewarding to work there. One can see the progress by the minute. Oh, and did I mentioned I had an encounter with a bee? Yes, it flew into my ear, didn’t find its way out, I couldn’t get it out, we both got very irritated, she stung me and I fled the scene. A few drops of rescue remedy and it was bearable.

Than during tea break I was ‘forced’ into a very strange conversation. I am not even really sure that I understood the guy properly, but it sounded like I was forcing my children to learn English when in fact they didn’t have any desire to do so. Well, what a strange thing to say about children that he had just met. But he was pretty sure and felt confirmed in his opinion after having spoken with them for a couple of minutes. Apparently Lara wants but Alina is reluctant. Well, this guy just doesn’t know Alina. If she doesn’t want to do something there is nothing, absolutely nothing I can do to change her mind. But, regardless of how absurd the whole conversation felt, I couldn’t quite ignore it and had to think about it for a while. But at the end of the day, this is his story and he is projecting his thoughts and feelings into other people and I trust that we are doing the right thing and that everything will work out.

After a lovely lunch at the CC the girls and I went to Barbara and Don’s to work the afternoon there. Last Friday they had shown me what I could do in their absence and that’s what I did. And what a glorious afternoon it was. Really sunny. Really hot.

This evening I had promised myself to do a SoulCollage® card. And I started but now I am stuck and instead of banging my head against the wall, I go to bed and try again tomorrow. 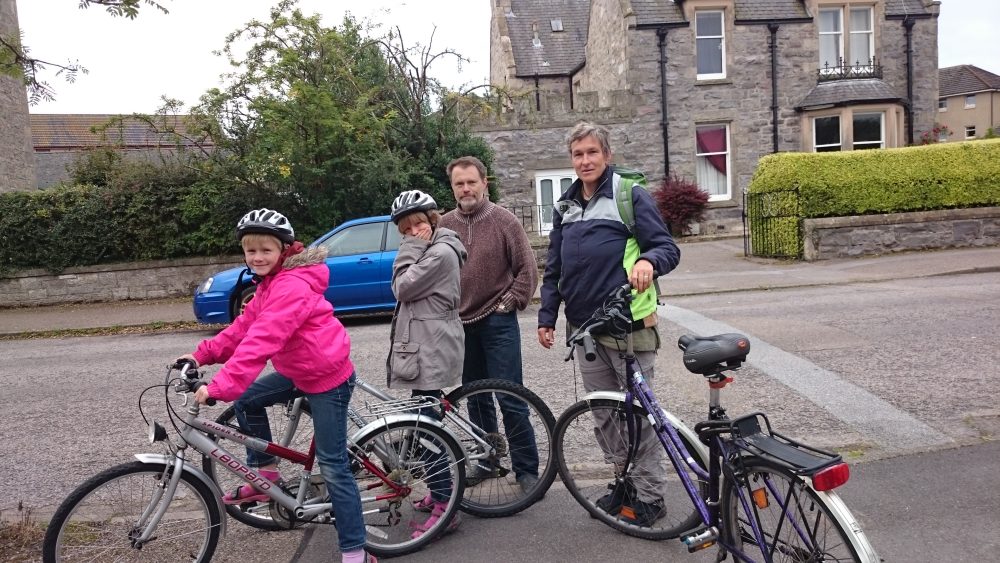 On the way to work. We with our bikes and Stéphane back to the office – lounge. Very first day Alina is cycling with Lara’s bike and Lara is cycling with a woman’s  bike. They grow up so fast…