Ok, Friday, 13th… ‘What is going to happen?‘ we were joking in the car on the way to Waihi where we had booked ourselves on the Gold Mine Tour.

But before we did the tour we stopped in a German bakery to have a nice cup of coffee. There we saw a sign that the shop was up for sale. So we asked the owner why they were selling and imagine their answer: The parents want to go with their three children on a sailing tour around the world for one year. Amazing.

With something good in our stomachs we started the tour. Mike, our guide was really funny and good at explaining things. We were the only ones on the tour so we could ask as many questions as we wanted. We visited the two mining sites. This one has been closed for a few weeks, because of the landslide. 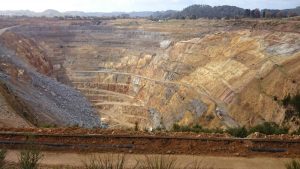 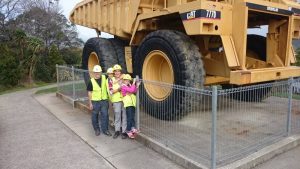 The mine is still in operation and although it is called a gold mine, there are mining more silver than gold. 350 people are working in the mine and another 350 in the town directly related to the mine. The company is producing between 40-45% of the revenue of Waihi, which makes it the most important employer in town. 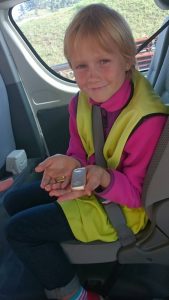 We learned all about the gold and silver grinding and sizing, the leaching and adsorption, the elution, the electrowinning and finally the smelting. We even got to hold some silver and gold bar. I would have loved to look inside of the plant but that was obviously not allowed. 🙁

Then after the tour we ate our lunch sandwiches and had decided to go for a lovely walk. People had told us about the Karangahake gorge. On our way Friday the 13th met us. And all our plans vanished.

I had wanted to pull the car into a small street to look at a railway bridge when we got hit by another car coming from the back. I even saw the car coming in the rear mirror but couldn’t do anything because of the oncoming traffic.

Well we were very fortunate, nobody got injured. We four were ok and the driver of the other car was also ok. But the damage to our car was significant. And then the fun started. We called the rental company not once, not twice, not three times but more than that. I don’t really want to get into details but it was quite a procedure. 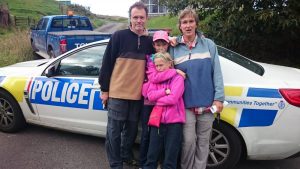 Bottom line was that a tow truck was giving me a lift into Auckland and the husband of the driver of the other car gave Stéphane and the girls a lift back to Papamoa, which was also a two hours drive for him.

I arrived around 5:30 pm in Auckland and started to look for a reasonable prized room. Finally around 6:30 pm I was in my room. For the first time in ten months I was sleeping all alone with my family being not around. A very strange feeling. My dinner were the mandarins that I took along and the walnuts that the girls had picked for me while waiting for the tow truck. Alina gave me the walnuts saying she wanted me to feel at home. 🙂

Looking back, we have a lot to be grateful for:

The annoying things were: