1. The fuzzy fruit is sky-high in both soluble and insoluble fiber, both of which are essential for promoting heart health, regulating digestion, and lowering cholesterol levels—that’s a winning trifecta.

2. Kiwifruit’s fiber content (as high as many whole grain cereals!) contributes to its moderate to low glycemic index of 52, meaning that this fruity, green gem does not rapidly raise blood glucose levels—great news for individuals suffering from diabetes.

3. Kiwifruit has also been considered a “nutritional all-star,” as Rutgers University researchers found that kiwifruit has the best nutrient density of 21 commonly consumed fruits.

4. Along with vitamin C, kiwifruit are rich in many bioactive compounds that have antioxidant capacity to help to protect against free radicals, harmful by-products produced in the body.

9. Kiwifruit has been growing in New Zealand for over 100 years. Once the fruit gained in popularity, other countries started to grow them including Italy, France, Chile, Japan, South Korea and Spain.

10. At first, kiwis were referred to as ‘Yang Tao’ or ‘Chinese Gooseberry,’ but the name was ultimately changed to kiwifruit so that everyone would know where the fruit came from.

And did you know there is even a red kiwi? 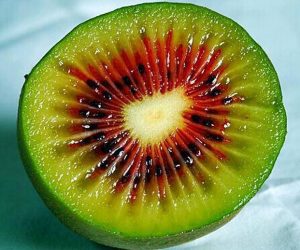 Today we first went for a little hike up Mt. Maunganui. From there we had the most amazing view over the Bay of Plenty. And there is plenty: plenty of beaches, plenty of water, plenty of islands. I had hoped to see White Island and the smoke from the active volcano, but the weather wasn’t clear enough for that. 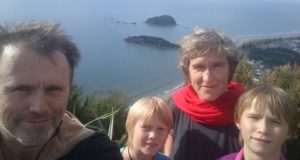 When we were down again, it was time for an ice cream followed by our packed lunch (sandwiches) before we went to our airbnb.com hosts work place. Edward is working in a research facility where they are trying to create better, sweeter, bigger… kiwis. We learnt so much from him. I didn’t have any idea that there were so many different kiwi varieties. Genetic modifications aren’t allowed in NZ, so all their work is about mixing different varieties with each other. Apparently there are 50 different ones in China. When we left him, we wanted to visit one of the main attractions in the Bay of plenty kiwi360. Everybody talks about it. It is in all the travel brochures. But, when we got there we found out, that it is now closed for good…

When we were back in Papamoa, the family went inside the house and I went outside to the beach.

It was beautiful, amazing, gorgeous and wet. It had started to rain and there was a bit of sunshine, so I got to see a little rainbow just over the water. I was just sitting there and admiring the beauty of the ocean and the sky. 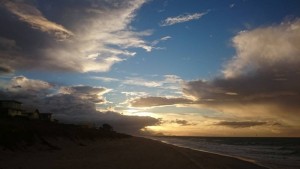 God, I would love to live in a place like this. I could walk every day along the beach. I could hear the ocean from the house and … dream on Anja