Saturday and an excursion back in time.

Today was the Norwegian Weekend in Burghead. The Glasgow Vikings were putting on a few battle shows, told stories, showed the kids their weapons and their craft. I was talking to a lady who is doing textile crafts. Everything from spinning to dying and making actual clothes with it. All dyes are natural products, like onion skins and some plants. For the blue she is using woad leaves. 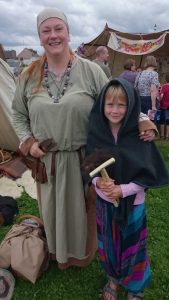 Very cool and practical throw. This one was for an adult keeping head and shoulders warm and protected against rain.

Then they told stories about the Vikings and their Gods (like Loki, Odin and Thor) like the one of Idun and her Golden Apples.

And I learnt something about the Picts. But who were the Picts? A question that many historians/archeologists/researchers have tried to answer. With the many different theories about their name, their origin, their society, their beliefs that exist it is a hard one to answer and of course the big question where did they go. This mystery is mainly due to the fact that they left no written records. All we know of them is from second-hand and unreliable evidence, lifted from the various historical writers who recorded their own, possibly biased impressions of the Pictish people. From these accounts we are told that by the fourth century AD, the predominant people in north east Scotland were referred to as “Picts”. The earliest surviving mention of the Picts dates from 297AD. The word Pict means “painted people” and may refer to the Picts tattooing their bodies or embellishing themselves with war-paint. But evidence for this is limited as the depictions of the male and female Pictish nobles, hunters, warriors which are found on monumental stones are without obvious tattoos.

And then there was one more amazing thing. We walked around the harbor and saw an old old boat nearly falling apart. When we turned around to walk away a man approached us and gave us a drawing of exactly that boat. Peter R. Morris the artist himself gave it to us as a present because we were interested in the boat. The Macduff, before known as the Harvest Reaper, had an interesting life. He told us that the boat was bought by David Meldrum who was part of a group which salvaged the 20-tonne vessel from Burghead Harbour after it ran aground in the 1980s. Following the recovery, Mr Meldrum claimed the Harvest Reaper as a retirement project, but, 30 years on, the 67-year-old has never stopped working, and the boat has lain untouched where Moray Council was about to begin a £250,000 development project and the Harvest Reaper was in the way, and had to be removed. A local plumber Jimmy Wiseman pledged to save it and a crane from Macduff Shipyards helped hoist it from its quayside site to a temporary new home along the harbor’s south pier. Watch the amazing timelapse video of its painstaking move. A move that allowed our family portrait to be taken today in the harbor. 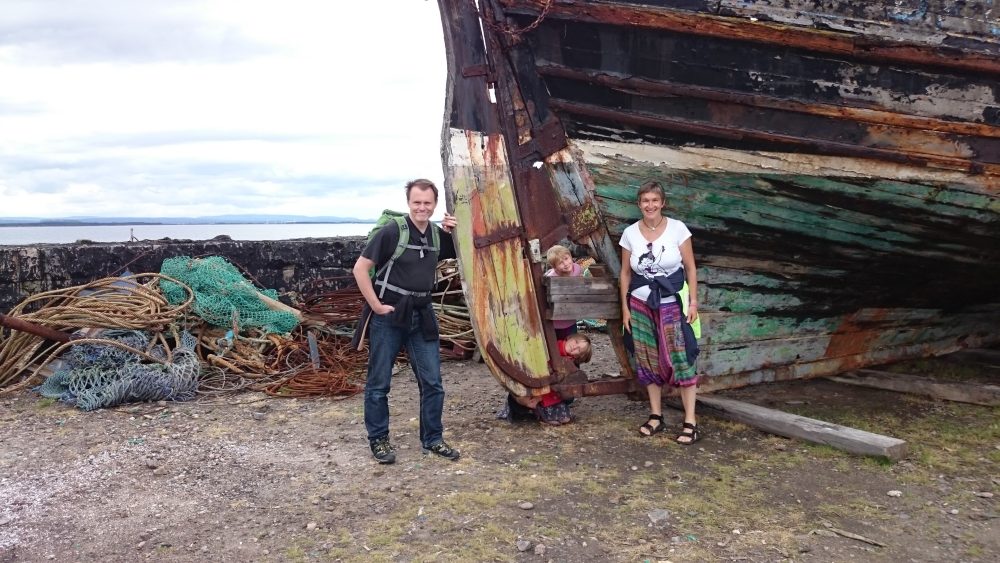