When I arrived in Cullerne Garden I overheard a conversation that there was a lot of unused coriander in the Park’s kitchen fridge. And for us gardeners it is difficult to see when things that we grow, go off and then get thrown away. So the idea was in the room to make coriander pesto. But Silvia, the gardener, didn’t have time to do it. So I volunteered.

For a while I had said that I wanted to work in the kitchen just to see something else, to learn how they cook and to get some delicious recipes. Here was my chance. I took a risk. Although I have been making basil pesto at home with some success. I had never tried coriander pesto and here there are up to 100 people who would eat in the CC and what if they wouldn’t like it…?

Anyway, the morning was again used for my flower garden. Yes, it is MINE !!! 🙂 Isn’t it funny, after a few shifts in the flower garden it is mine! I love working there. I discover flowers and bushes and trees in between all the weeds. After the morning shift I had lunch in the CC and sat at a table with mainly Germans. Funny how it is here in Findhorn.

Then the cooking adventure started. There was so much coriander. It took me nearly two hours to remove all the leaves from the stems. At home I probably would have used the stems too. But here I wasn’t sure how powerful their machine was and me wanting it to be perfect, I just sat there and worked and worked and worked… At some point all the leaves were done, everything washed – but the machine was used by somebody else. Well, there was no point in going and coming back later, so I just asked what else I could help with and there is always something to do in the kitchen. Everything from cutting eggs to forming nut balls, cleaning, washing the dishes, putting things in the steamer, taking things out of the steamer… etc. Time flew by and suddenly I could use the machine. I added some sea salt, some mixed nuts and olive oil and voila – coriander pesto… yummy. In the meantime it was already 17:15 and it looked like we were done preparing. Calm and peaceful it felt in the kitchen – until – Stuart came back with the booking sheets for dinner and suddenly there was a sense of panic. Over 100 people had registered and maybe there was just not enough food? So more salad washing, peas and green beans in the steamer and some praying that all would be ok.

At 17:55 the people were queuing outside and we decided that it was time to give blessings to the food and let the people eat. For us in the kitchen that was not really the end of the shift. We needed to bring the empty trays into the kitchen and replace them with more food, needed to tick off the people in the booking system, help people when they had a question about allergies etc. So although my family had come for dinner, I was not ready to sit down with them and eat. When I was released from my duties 🙂 I actually emptied the ‘empty‘ trays on to my plate, meaning I was eating what otherwise would have gone to the bin. And it was a lot. So eventually I sat down with my family ate my fish pie and Barbara’s cake with whipped cream and calmed down. I loved being in the kitchen, preparing food, helping each other, coming up with new creative recipes, licking out the huge bowl of whipped cream, talking to each other, having a glass of wine at the end of the shift… all that and much more.

After dinner I quickly changed into cleaner clothes and then went to a talk by Robert Holden. I had come across his name already when I did a mirror workshop with Louise Hay’s meditation program. He co-wrote a book with her called ‘Life loves you‘.

Robert started his talk by giving us the chance to reflect on why and how life loves us personally. So we had to go around the room and finish the sentence: ‘Life loves me, …‘ It felt pretty much like writing in my gratitude journal. So I thought of the following proofs:

And he finished his talk with a meditation leading to the point where in our heads we had answered the question on what would need to happen for us to believe a little bit more that Life loves us – and I am telling you, I had a few ideas and within 24 h some of them came true. These sort of things might seem strange outside of Findhorn. Here in Findhorn it is the most normal thing. Findhorn is in that sense a magical place. Here anything can happen. 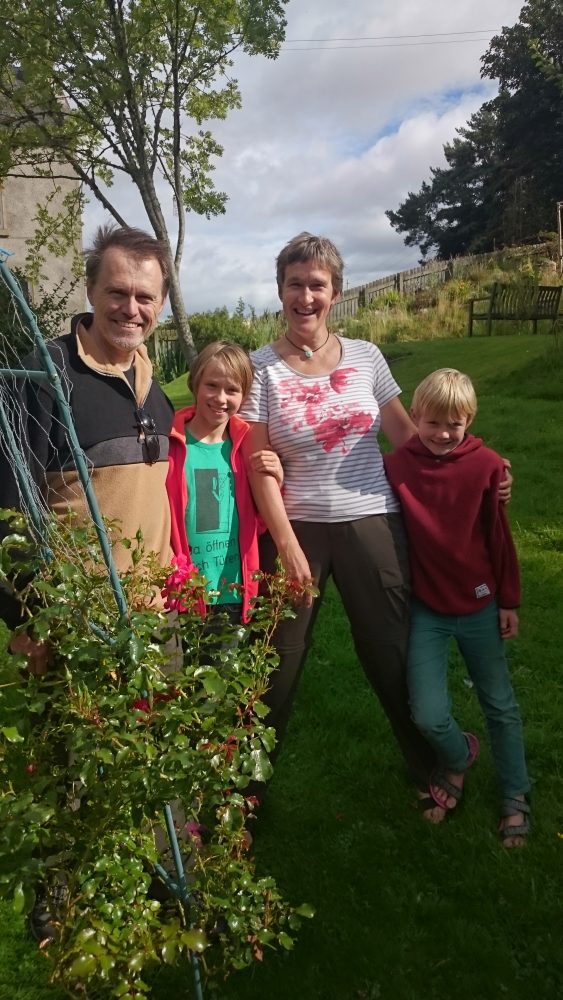 in Don and Barbara’s Garden