Can you believe it? DAY 50 already !!!!! And we celebrated the big day with a lot of Scottish rain.

I had signed up to help Alina’s class on their outing this morning to the forest. The whole morning was run by a charity called Wild Things. But the whole adventure started before we even left school. The whole class had looked at the weather forecast yesterday and knew that it would be raining. Which it was already when we got up this morning. So we put on our water proofs and wellies. When we arrived at the school, there were kids in leggings and trainers. The school even had some rain trousers for the kids and we handed them out to them but some kids just didn’t want to put them on. Some were wearing thin jackets that were soaked through in no time. I don’t understand that. As a mum – I wouldn’t never allow that. If I know they go out, they have to put on all the stuff they can. Because if they are getting ill, I’ll have to look after them. So it should be in the parents own interest to fully equip their children. When I was studying in the UK 20 years ago, I already wondered about the dress code in this country. When we went out on a Friday night, and it would be cold and rainy, the girls would still be wearing mini skirts and short sleeved t-shirts. Nothing has changed then.

Anyway, we walked from the school to the community forest in Forres. There we met Holly and another team member of the Wild Things. The topic of the day was trees. They explained the different parts of a tree by playing a game, we built a shelter around a tree, looked at different leaves and saw giants. 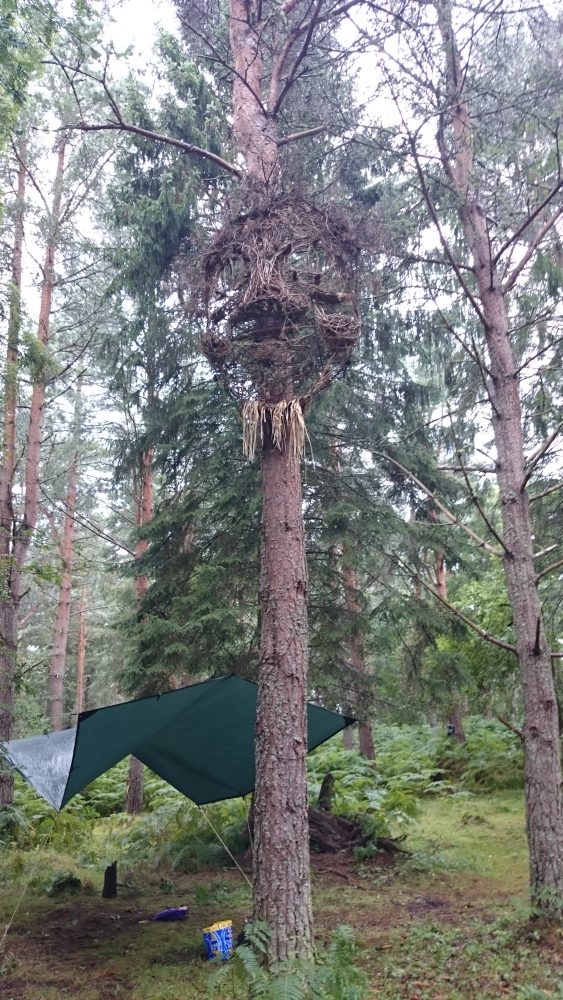 When the ice age 10000 years ago finished, the whole of Scotland was covered by the Caledonian forest.

The Caledonian Forest (extract from Trees for Life)

With its ancient pines and spectacular mountain scenery, the Caledonian Forest is Scotland’s most iconic landscape. It once covered a large part of the Scottish Highlands and takes its name from the Romans, who called Scotland ‘Caledonia’, meaning ‘wooded heights’. The native pinewoods, which formed the westernmost outpost of the boreal forest in Europe, are estimated to have once covered 1.5 million hectares as a vast primeval wilderness of Scots pine, birch, rowan, aspen, juniper and other trees. On the west coast, oak and birch trees predominated in a temperate rainforest ecosystem rich in ferns, mosses and lichens. Many species of wildlife flourished in the forest, including the European beaver, wild boar, lynx, moose, brown bear and wolf, as well as several notable species of birds – the capercaillie, crested tit and the endemic Scottish crossbill, which occurs nowhere else in the world apart from the pinewoods.

The decline of the Forest

Sadly, the Caledonian Forest that we see today is much reduced in size. There has been a long history of deforestation in Scotland, and clearance of the land began in Neolithic times. Trees were cut for fuel and timber, and to convert the land to agriculture. Over the centuries, the forest shrank as the human population grew, and some parts were deliberately burned to eradicate ‘vermin’ such as the wolf. More recently, large areas were felled to satisfy the needs of industry, particularly after the timber supply in England had been exhausted. The widespread introduction of sheep and a large increase in the numbers of red deer ensured that once the forest was cleared, it did not return. Today only a tiny percentage of the original forests survive, and the native pinewoods have been reduced to small, isolated remnants (marked on the map on the right). Gone with the trees are all the large mammals, with the exception of the deer. Species such as the brown bear and the wild boar had become extinct by the 10th and 17th centuries respectively, while the last to disappear was the wolf, when the final individual was shot in 1743.

As a result of this human-created imbalance in the ecosystem, the remnants have become ‘geriatric’ forests, composed of old trees reaching the end of their lifespans, with no new ones growing to take their place. As the trees die, the forest continues to shrink, and without protection from overgrazing, most of the remnants will disappear in the next few decades. Thus, we are the last generation with the opportunity to save the Caledonian Forest and restore it for the future.

Sad, really sad. I want to find at least one of those trees before we are leaving Scotland.

I’m a Celebrity… Get Me Out of Here!