This was actually our very last full day in Forres/Findhorn and we wanted to really really make the most of it.

So I got up just after 7 am, got dressed and drove to Findhorn beach. I absolutely wanted to see the sunrise and what a sunrise it was…

Afterwards we had breakfast and then went to Barbara and Don to say our final good-byes to them. Leaving them was not easy and I sincerely hope we see each other again.

Then we chose to go to Findhorn Park, brought some stuff to the Boutique, picked up some vegetables for dinner, saw Luc about Alina’s bike… and then it was time to have lunch in the CC. Our very last lunch for this time.

And again here we were saying good-bye to all the people we knew. Silvia summed it up quite rightly “This is what Findhorn is about. People leaving and new people arriving.”

Then there was a final stop at the Phoenix (THE shop in the Parc) to get myself a farewell present 🙂 and then coffee and cake at the Blue Angel. And there we opened a present we had received from a good friend, and mine couldn’t have been more spot on. 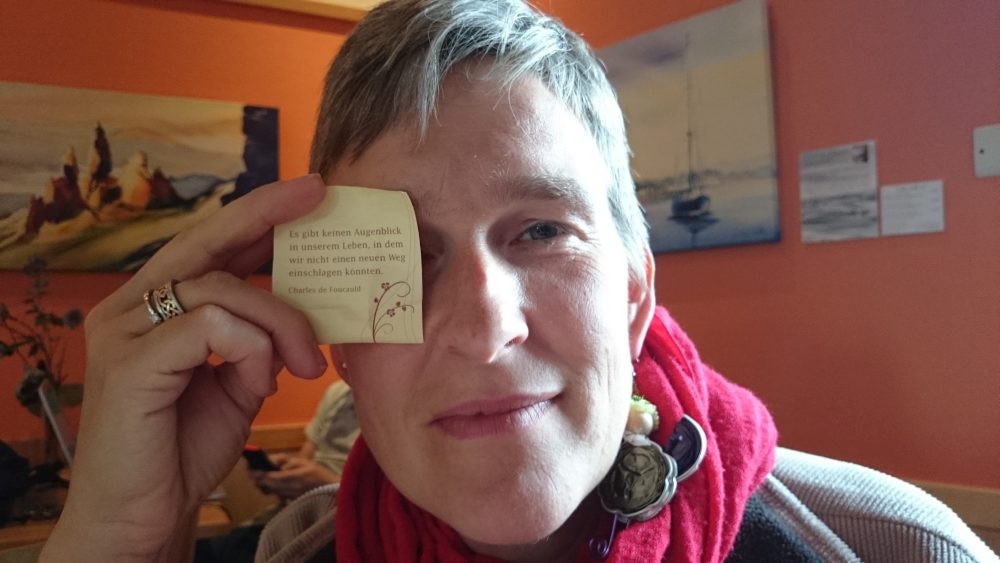 Then Lara wanted to go to Cullerne Garden to say good-bye to it, yes, not to the people, but to the garden. So Alina, Lara and I went there. We picked our favorite places and talked about our fond memories of the place. So there were the three trees I had planed, Badger and Otter, the flower garden… memories of what we did, what we saw, the people we met… it was actually a rather nice experience and I am grateful Lara had the idea.

Time was quickly gone and we needed to head back to Forres, where I had a final unplanned session with my acupuncturist. I had asked her to help me with my pain in my bum and although it had gone better over the last few days, I was grateful to see her. I have had a suspicion what was manifesting there, but hearing it from her… just confirmed my thoughts. My ligaments were basically tensed up, not allowing me to move freely – because I feel uprooted from Scotland and I would probably love to stay here. So there is no real treatment, but to learn to ground myself wherever I am. The needles she stuck into me caused so much pain at some point that I could have cried. My whole left leg was so sore afterwards and cold, there was just no chi left in me. So when I got home, I had a hot shower and a hot food bath to drain the chi down, to release the tension. And when I get to Laos, she suggested, I should find myself a good Thai-massage therapist. Will do.